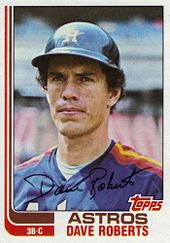 Dave Roberts was with Team USA when they won Silver in the 1970 Amateur World Series. He was picked by the San Diego Padres as the first overall selection in the 1972 amateur draft, out of the University of Oregon. He did not waste any time signing, skipped the minor leagues entirely, and, going straight to the majors, made his major league debut on June 7th - one day after the draft - entering the second game of a doubleheader against the Pitsburgh Pirates at third base in the 12th inning, replacing pinch-runner Johnny Jeter. He had time to go 0-for-3 that day as the game was not decided until the 18th inning. He started his first game on June 10th, going 2-for-4 with a double against the St. Louis Cardinals and was a starter at third base the rest of the way for the Padres, a very weak-hitting team that needed all the help it could get. Before his first month was over, on June 29th, he had a four-hit game against the Atlanta Braves, including hitting his first career homer off Mike McQueen. He finished the year at .244 with 5 homers and 33 RBIs in 100 games and was named to the 1972 Topps All-Star Rookie Team.

Roberts followed his rookie year with an excellent sophomore season in 1973, when he hit .286 with 21 homers and 64 RBIs in 127 games. He also hit .375 in 22 games for the AAA Hawaii Islanders, showing he had little to prove at a lower level. With Dave Winfield and Randy Jones also joining the team that season, the Padres seemed to be assembling the core of a very solid young team, but it soon all came crashing down for Dave. His 1974 season was a nightmare, as he hit just .167 in 113 games, with 5 homers and 18 RBIs. The Padres decided that this was due to his having skipped the minors (never mind that he had done well in both 1972 and 1973) and sent him to Hawaii to start the 1975 season. He hit .262 with 12 homers and 71 RBIs in 121 games in the Pacific Coast League, earning his way back to San Diego by late August. He did well when called back, with a .283 average in 33 games.

One would think that at that point, the Padres would have stopped messing around with such a promising young player's career, but that would be understimating the Padres' ability to make stupid decisions in those days. They had already tried Roberts at second base and shortstop in the majors, taking advantage of his athleticism, and in 1975 second base had been his most frequent position with Hawaii. But in 1976, they went one better, deciding to turn him into a catcher! The move sort of worked: he became a decent enough backstop to earn his keep in the majors as a utility player for a number of years, but it also put an end to his potential development as a front-line position player. To learn the new position, he was back in Hawaii for all of 1976, hitting .249 with 10 homers and 53 RBIs in 106 games under manager Roy Hartsfield.

Hartsfield was named manager of the expansion Toronto Blue Jays for the 1977 season, and he convinced the young team's front office to acquire a number of players he had managed at Hawaii the previous season. Thus, Roberts, IF Dave Hilton and OF John Scott were purchased by the Jays on October 22nd, while P Chuck Hartenstein was brought on board in a separate deal. Roberts had officially become an afterthought at that point, but there were still a few people in the Padres' organization who regretted having lost so easily someone who was one of the team's most iconic young players only a couple of years before, and they convinced management to repatriate him on February 16th, giving up P Jerry Johnson in the process. He then spent the entire 1977 season in San Diego, starting 42 games behind the dish and hitting .220 with 1 homer and 23 RBIs in 82 games. That was the last time Roberts was looked at as a potential starter at any position.

Beginning in 1978, Roberts became a full-time utility player, his ability to catch the occasional game, play various other positions, and be used as a pinch-hitter being a valuable mix, even if the stardom once predicted for him was no longer discussed. That year, he hit .214 in 54 games for San Diego, and also hit .267 in 36 games at Hawaii. After the season, he was included in a big five-player trade with the Texas Rangers that also saw Oscar Gamble, Mike Hargrove, Bill Fahey and Kurt Bevacqua change uniforms. He hit .262 in 44 games for the Rangers in 1979 (and .382 in 9 games for the AAA Tucson Toros), then followed that by hitting .238 but with 10 homers in just 235 at-bats in 1980. He became a free agent after the season and found himself in surprisingly high demand as the Houston Astros offered him a multi-year contract worth over a million dollars - a high figure for the time - to be a bench player. His contract was seen by many commentators yet another sign that contracts had spiraled out of control and that the apocalypse was nigh. Well, at least a damaging strike was nigh, and it reduced his 1981 season to 27 games and 54 at-bats. The strike failed to turn the tide of ever-larger contracts, but his lack of playing time proved a point for those who had scratched their heads about his large contract. The Astros seemed to agree that they had made a mistake, as they sent him to the Philadelphia Phillies during spring training the following year, netting only a non-prospect in return. He played one final year with the Phillies in 1982, hitting .182 in just 28 games in his now familiar third catcher/jack-of-all trades role. He was released the following May after not having played at all that season, ending a rather unusual career.

After his playing career, he was a coach for the Cleveland Indians in 1987.