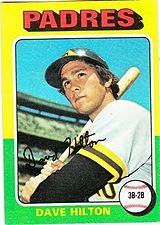 Dave Hilton was the first player selected in the January 1971 amateur draft, by the San Diego Padres out of Southwest Texas Junior College.

After a fairly unimpressive debut season out of college, Hilton was one of the top players in the Texas League in 1972, batting .315 with 15 homers and 73 RBI. He was fifth in the TL in RBI, tied for 8th in homers and in the top 10 in average. Despite less than two years in the minors, he was promoted to the Padres, where he struggled in a September call-up. After splitting time between three levels in 1973, Hilton hit .328 with the Hawaii Islanders at age 23 the next year and again spent half the season struggling as a Padres infielder. In 1975, he was back in the TL for much of the year before a rebound season in 1976. Still just 25, Hilton did well for the Islanders, batting .288 with 16 homers and 77 RBI, but didn't get another look from San Diego, his major-league career already over. He, infielder Dave Roberts and outfielder John Scott were purchased by the expansion Toronto Blue Jays from Hawaii after the 1976 season, after Islanders manager Roy Hartsfield was hired to be the Blue Jays' first skipper in 1977. Hartsfield brought a number of his former players with him, also including pitchers Jerry Johnson and Chuck Hartenstein and in addition to the three position players. Scott did get a chance to play for Toronto, but Hilton and Roberts never made the team, although they both appear airbrushed into the team's uniform in the 1977 Topps baseball card set.

After a mediocre 1977 back in the minors with the Toledo Mud Hens, Hilton signed with the Yakult Swallows. Hilton promptly had arguably the best season of his career, in 1978 batting .317/.381/.509 and making the Best Nine team at second base in the Central League. He set a Nippon Pro Baseball record with 8 homers leading off the game, set another record by doubling in six straight contests and made the All-Star team. As if that weren't enough, he then hit a two-out, two-run, come-from-behind game-winning homer in Game 4 of the Japan Series to tie the Series at two games apiece. In the off-season, he gained 20 pounds of muscle using a weight-training program. Manager Tatsuro Hiroka claimed Hilton was overweight and increased his training workload. Hilton promptly got a sore throwing arm. He later added a heel injury. That season Hilton declined in every area except homers and hit .258/.302/.451. Given his questionable defense, he was let go by Yakult. Hilton attributed the decline to injuries; Hiroka said he was "taking Japanese baseball lightly." Japanese writer Haruki Murakami claims his inspiration for becoming a novelist came when he was a spectator at a game between Yakult and the Hiroshima Carp in 1978; during one of Hilton's at-bats, he got a vision that he could be a writer, and by the time Dave reached second base with a double, Murakami knew what his first novel would be.

In 1980 Hilton was signed by the Hanshin Tigers at the request of Hanshin manager Don Blasingame. Hanshin fans said Blasingame was picking up a reject from another team, then became angry when Hilton started ahead of prized rookie Akinobu Okada. Hilton's defensive lapses and offensive struggles (he hit .197/.240/.239 in 18 games that season) led fans to harshly criticize Hilton and Blasingame and call for the usage of Okada. At one point, Tigers fans attacked a car in which Hilton, his wife and Blasingame were riding. Shortly after that, the taxi Hilton and Blasingame were in was overturned. Shojiro Ozu, the Hanshin owner, released Hilton and replaced his "gaijin slot" with Bruce Boisclair against the objections of Blasingame, who was later fired as well, in large part due to the Okada-Hilton controversy.

Hilton returned to the US and played two seasons with the Portland Beavers and then a year with the Mexico City Red Devils.

He coached with the Milwaukee Brewers for the 1987 and 1988 seasons. In 1989, Hilton played for the St. Lucie Legends of the Senior Professional Baseball Association. He hit .304 in 53 games with the club. In 1990, he played for the Sun City Rays of the same league. He played in 7 games and was hitless in 16 at-bats when the league folded.

He then settled in Scottsdale, AZ, where he founded the Arizona School of Baseball, which thought the fundamentals of the game to a large number of young players.