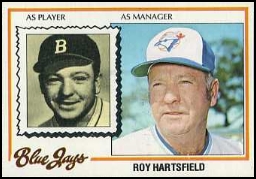 Second baseman Roy Hartsfield played parts of three years in the majors and later was the first manager of the Toronto Blue Jays.

Hartsfield began his baseball career with the Atlanta Crackers in 1943 before serving in the U.S. Navy through 1945. Following World War II, he returned to baseball, and he was drafted by the Boston Braves after the 1948 season. He hit .317 with 12 home runs and 86 RBIs for the Milwaukee Brewers of the American Association in 1949. He reached the majors with the Braves in 1950 and was a regular at second base for two and a half seasons. After being sent back to the minors during the 1952 campaign, he was dealt to the Brooklyn Dodgers for Andy Pafko early the next year.

Hartsfield started his managerial career in the Dodgers chain, taking over as player-manager of the St. Paul Saints in 1956 and serving in the same capacity for the Des Moines Bruins in 1958. He stayed in the minors through 1968, and moved up to the big leagues as a Dodgers coach from 1969 to 1972. He was a member of the Atlanta Braves staff in 1973, until he moved back to the minors on May 21st, taking over the San Diego Padres' Hawaii Islanders farm team. He stayed with the Islanders until becoming the first manager in Toronto Blue Jays history prior to the 1977 season. In three years at the helm of the Jays, the team went 166-318, and they finished in seventh place in each season. In 1981, he managed in the minors for the Chicago Cubs for two teams, and he spent one year at AAA for the Cincinnati Reds in 1983. Overall, he was 1373-1451 in 18 years as a skipper in the bushes.

He died from complications of liver cancer at age 85. Hartsfield was the brother of longtime scout Bob Hartsfield.