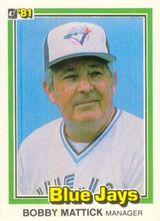 Bobby Mattick had a career in baseball that spanned 70 years. Best known by many for his years as manager of the Toronto Blue Jays, he played several seasons in the majors and was a scout for more than 30 years before joining the Jays.

The son of big league outfielder Wally Mattick, Bobby Mattick was born in Sioux City, Iowa while his father was a player for the city's Western League club. He grew up in St. Louis, Missouri and graduated from Beaumont High School in 1933. A shortstop, he was signed by the Los Angeles Angels of the Pacific Coast League that fall and made his pro debut the following year. He missed most of the 1935 season due to a broken wrist, and the next year, he was on the disabled list for several months after being struck near the eye by a foul ball. The latter eye injury caused double vision that plagued him throughout his career. Mattick finally played a full season with the Angels in 1937, hitting .279 with 66 RBI in 167 games as the team's regular shortstop.

After that season, Mattick's contract was purchased by the Chicago Cubs, and he made his big league debut in 1938, getting a hit in his only plate appearance in the majors. However, he missed much of the season as a result of his previous eye injury. After splitting the next year between the Cubs and the Milwaukee Brewers of the American Association, he was the Cubs' regular shortstop in 1940 but struggled at the plate, hitting just .218. After the season ended, he was traded to the Cincinnati Reds along with outfielder Jim Gleeson in exchange for shortstop Billy Myers. He spent the next two years with the Reds, but his playing time was quite limited. After the 1942 season, Mattick retired as a player.

After his playing career ended, Mattick was a Birmingham Barons coach in 1944. From 1945 to 1975, he was a scout for nine different clubs. During his scouting career, he was responsible for signing Curt Flood, Vada Pinson, Jim Maloney, Rusty Staub, Don Baylor, Gorman Thomas, and Hall of Famer Frank Robinson. In addition, he spent part of the 1948 season as manager of the Ogden Reds of the Pioneer League. In Charlie Metro's autobiography, he shared this anecdote about Mattick: "Bobby Mattick managed the Cincinnati Reds Ogden club in the Pioneer League in 1948. He had a left-handed pitcher by the name of Cliff Ross, who could throw like nothing I'd ever seen before. I was a little leery of this guy. He was wild inside, all over the place. We scored 13 runs against him in the first inning of one game. I think he walked all the guys, over thirteen in a row. Bobby let Cliff stay in. Years later, when Bobby was managing the Toronto Blue Jays, I had the occasion to remind him of that game. He didn't like that. He didn't have much of a sense of humor." Mattick was the Scouting Director of the Cleveland Indians in 1965 and 1966 and director of player development for the Milwaukee Brewers in 1970 and 1971.

He joined the Toronto Blue Jays as a scout in 1976 as one of the expansion team's first employees. After two seasons, he became the club's Director of Player Development. At age 64, Mattick took over as the team's skipper in 1980, becoming the oldest rookie manager to start a season. After two years at the helm and two last-place finishes, he became the Blue Jays' Vice President of Baseball Operations. Mattick remained with the club until his death from a stroke in 2004 at age 89.

Mattick was inducted into the Canadian Baseball Hall of Fame in 1999, and in honor of his many years of service to the club, the Blue Jays named their spring training complex after Mattick.

"Bobby was a father figure to everyone here. His life was baseball and everyone here recognizes his worth to the organization. Bobby Mattick was the senior statesman of the Blue Jays family since Day 1." - Paul Godfrey, Blue Jays President

He also managed the Seattle Pilots team in the 1969 Arizona Instructional League.