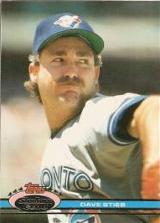 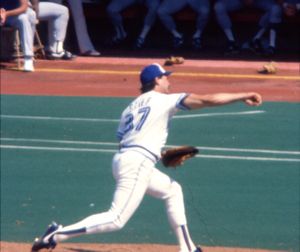 Dave Stieb was one of the best pitchers of the 1980s and one of the Toronto Blue Jays' first stars. He was in the top ten in Cy Young Award voting four different times.

Stieb was signed as a 5th round pick in the 1978 amateur draft by the Blue Jays and scout Wayne Morgan and GM Pat Gillick. He pitched for the Jays for 14 seasons, from 1979 to 1992, winning 174 games during those years. He also pitched the only no-hitter in Blue Jays history on September 2, 1990. Stieb pitched five career one-hitters; three times he lost no-hit bids with two outs in the 9th inning; Bill Burns is the only pitcher to have that happen even twice, while Yu Darvish came close, but the second of his one-hitters was erased when a 7th-inning error was ruled a hit upon review by Major League Baseball a few days after the game. In 1988, Stieb pitched back-to-back one-hitters, something no other big leaguer would do for 24 years; R.A. Dickey would be the next hurler to mimic the feat.

After going 1-3 in four starts for the Chicago White Sox in 1993, his big league career appeared to be over. However, in 1998, at age 40, he returned to the Jays. He went 1-2 with a 4.83 ERA and started three games. After a successful comeback season, Stieb retired for good.

He was the first primary pitcher to get an at-bat for the Toronto Blue Jays, on August 29, 1980, in a game in which he also played left field. In the top of the 15th inning, he faced Albert Williams, flying out to center.

Stieb's brother, Steve Stieb, was a catcher in the Atlanta Braves chain.