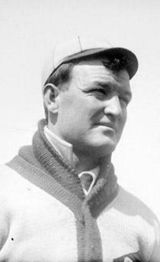 "[Burns and Maharg approach Abe Attell at the racetrack]

Abe Atell: You, you were a ball player. 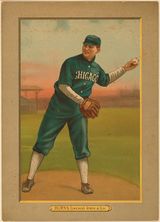 "Sleepy" Bill Burns earned his nickname for his noticeable lack of intensity on the mound. Pitching with five teams in five seasons, Bill had a 30-52 record but a rock solid 2.72 ERA in 117 games and 717 2/3 innings. During his career, "Sleepy Bill" twice lost a no-hitter with two outs in the 9th inning; Dave Stieb is the only other pitcher to have experienced that form of heartbreak twice, having done so three times. Yu Darvish came close, but in the second of his broken up no-hitters, an error was changed to a hit a few days later, making the game officially a two-hitter. He later managed the 1920 Mineral Wells Resorters.

Though out of MLB for seven years before the Black Sox Scandal, Burns brought together the "Black Sox" and the gamblers who fixed the 1919 World Series. Burns was discovered hiding in Mexico by Ban Johnson; Arnold Rothstein testified that all he knew of a fix was that Burns and Abe Attell approached him about fixing the Series. Bill became the star prosecution witness in the Chicago trial. In the film Eight Men Out, he is portrayed by Christopher Lloyd.