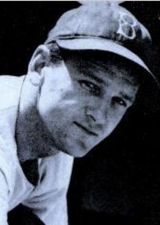 Bruce Edwards played ten years in the major leagues, appearing in two All-Star Games and two World Series. His most notable year was 1947, when he was fourth in the MVP voting.

Edwards played in the minors in 1941 and 1942, then missed 1943 to 1945 due to military service. He became a regular as a 22-year-old rookie with the Brooklyn Dodgers in 1946, and although figuring in the 1947 MVP voting, had an arm injury the following year and lost his catching job in 1948 to the rookie Roy Campanella.

Edwards was a backup from then on in the majors, also playing for the Chicago Cubs, Washington Senators and Cincinnati Redlegs.

In 1947, the backup catcher behind him was the young Gil Hodges, soon to be moved to first base.

He managed the 1957 Visalia Redlegs to a first place finish.

After baseball he was an inventory control analyst and a movie projectionist.