The Indianapolis Indians are a former International League franchise, now playing in the Triple-A East, who are the only minor league team that has played in the same city using the same nickname since 1902. The Indians, in fact, have used that name for 13 years longer than those of Cleveland - which bought its Indy namesake in 1952 and was about to move it when locals bought it back.

The I-Tribe is considering changing the nickname, after the NFL's Washington Redskins did and Cleveland's Indians said they will, although being named after both their state and city, it would seem to be unnecessary. Another moniker-related tidbit is that only Indy and the Spokane Indians use a big-league nickname that's not their parents', and both use the same name.

For a team that has shown great continuity in its nickname, there has not been the same stability in terms of leagues. In 1941, former major leaguer Donie Bush bought the club and ran it for a decade. When the American Association disbanded after the 1962 season, the Indians joined the International League in 1963, and then the Pacific Coast League from 1964 to 1968. In 1969, the American Association was re-formed, following expansion in the major leaguyes, and the team returned to their old circuit - for a spell. The Indians left their longtime home, Bush Stadium, and moved to a new downtown stadium, Victory Field, in 1996. In 1998, Triple-A baseball consolidated into two leagues, again killing the Association, and the club rejoined the International League. In 2000, the Indians won the Triple-A World Series. 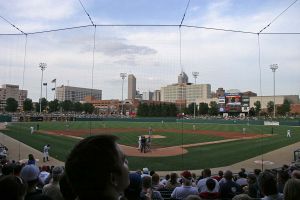 view of the field

In a feat of extreme rarity, two members of the Indians completed the cycle in the same inning on August 7, 2018. How rare is that? Minor League Baseball doesn’t maintain such records, but it has never been done in even the same game in the Majors.