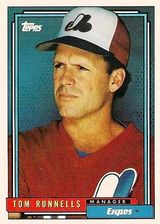 Runnells played in the minor leagues for almost nine years before he got his brief major league shot. He began his career in the San Francisco Giants organization, playing seven years in their system. He hit .300 a couple of times for the Phoenix Giants in the Pacific Coast League but showed little power. He moved on to the Cincinnati Reds in 1984, and finally reached the bigs as a 30-year-old rookie in 1985 on manager Pete Rose's club. He had another cup of coffee with the Reds in 1986 but retired following the season.

Runnells started managing in the Reds system in 1987 and led the Chattanooga Lookouts to a league crown the next year. He moved on to the Montreal Expos organization in 1989 and led the Indianapolis Indians to the American Association championship. This success earned him a spot on the Expos big league coaching staff beginning in 1990 as a third base coach. Midway through the 1991 season, he replaced Buck Rodgers as the team's manager. After about a year at the helm, he was replaced by Felipe Alou.

His time as Expos manager was short but tumultuous. Succeeding the very popular Rodgers, he had trouble establishing his credibility with the media and the team. He was General Manager Dave Dombrowski's hand-picked man but failed to replicate his minor league success as the Expos finished the 1991 season in last place for the first time since 1976. In what became his defining moment, he made an entrance at spring training in 1992 dressed in marine fatigues, apparently trying to channel the spirit of General Norman Schwartzkopf. Everyone who witnessed the performance found it eerily distressing. He then proceeded to try to shake up the team through various strange moves, such as shifting three-time Gold Glove winner Tim Wallach from third base to first base in order to slot in Bret Barberie, who had hardly ever played the position in organized baseball. The players quickly were in open revolt against their leader. Runnells' position with the front office had become shaky anyway, as Dombrowski had bolted the organization and had been replaced by Dan Duquette, who sacked Runnells on May 22nd, replacing him with the calmer and more experienced Felipe Alou, under whom the team started winning immediately.

After leaving the Expos, Runnells managed in the Detroit Tigers system for several seasons and served again as a coach. Runnells was the Tiger's advance scout in 1997-1998 and their minor league hitting instructor for the 1999-2003 seasons. More recently, he led the Tulsa Drillers in 2004 and 2005 and became skipper of the Colorado Springs Sky Sox in 2006. In 2009, Runnells started the season as the Sky Sox manager but was promoted to the Colorado Rockies bench coach to replace Jim Tracy, who became the team's new manager. He retained the position when Walt Weiss succeeded Tracy as manager in 2013. On May 13, 2015 he took over as Rockies' manager on an interim basis while Weiss was recovering from an appendectomy. He retired when Weiss's tenure ended after the 2016 season.

In retirement, he found a second career as an artist, using old baseballs destined to be thrown away and deconstructing them, using their parts as materials to create artworks paying hommage to baseball history, and particularly to the Negro Leagues. He spends a lot of time researching the history of the players he depicts, and all proceeds from the sales of his artwork go towards supporting youth baseball around Toledo, OH, where he settled down in retirement. Given he has no formal art background, he works with a friend, Jeff Stone a former baseball coach who is an actual artist, who draws the portraits, whereas Runnels focusses on how to depict the subjects, adding background elements, and conceptualizing the whole works. He did always have a penchant for art, preparing his line-up cards in ornate calligraphic style back when he was a coach