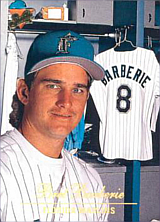 Bret Barberie played in the majors for six seasons, getting into nearly 500 games.

Bret played second base in college for the University of Southern California before he was selected in the 7th round of the 1988 amateur draft by the Montreal Expos; he had been drafted three times previously but stayed to finish college. He eventually signed with scout Kevin Malone, but kept his amateur status and played for the US Team which won the 1988 Seoul Olympics (baseball was not yet a medal event). He also played for Team USA in the 1988 Baseball World Cup, going 2 for 4 with a double, RBI and 4 runs as a backup infielder. He began his professional career the next year with the West Palm Beach Expos in the Class A Florida State League, where he was an all-star shortstop. Moved back to second base, he had an excellent season for the Double A Jacksonville Expos in 1990: as the team's leadoff hitter, he recorded 112 hits and drew 86 walks in 133 games.

Barberie was first called up to the majors in June 1991, but was used sparingly, only coming to bat 20 times in his first month with the Expos, before being sent back down to the Triple A Indianapolis Indians. He was called back for good on August 2nd and went on a torrid hitting streak until the end of the season: from that point on, he hit .371. In his first game back on August 2 [1], he hit a home run batting left-handed against Danny Cox of the Philadelphia Phillies in the 3rd inning, and added another batting right-handed against Wally Ritchie in the 7th; only Tim Raines had performed this feat for the Expos before him. On September 8th [2], he started a triple play at third base in the 9th inning to clinch a win against the Cincinnati Reds. In a year where everything that could go wrong for the Expos did, Barberie was one of the few bright spots.

If 1991 was a dream season, 1992 was a nightmare. New manager Tom Runnells handed him the regular third base job in spring training, which meant that team captain and three-time Gold Glove winner Tim Wallach would move to first base. This was one of many moves that caused a player revolt against Runnells, leading to his firing on May 22nd. Barberie did not help matters by having a difficult season both at the plate and in the field, not surprisingly in the latter case since he had never played third base on a regular basis at any level. He ended up hitting .232 with a pathetic .281 slugging average, quickly losing his job back to Wallach. In September, the Expos traded for young third baseman Sean Berry from the Kansas City Royals, a sure sign Barberie was no longer part of their plans. Indeed, he was unprotected for the expansion draft and was the seventh player chosen overall by the Florida Marlins.

Barberie was the Marlins' regular second baseman during their first two seasons in the National League, hitting .277 in 1993 and .301 in 1994. He was the Marlins' second baseman and second hitter in their inaugural game played on April 5, 1993 in Miami, FL [3]; he collected two hits and scored a run in the Marlins' 6-3 victory over the Los Angeles Dodgers that day. Barberie once missed a game with the Fish, in 1994, after managing to get chili pepper juice in his eyes while putting in his contact lenses. Despite decent batting averages in his two years in Florida, he hit for little power and did not score or drive in many runs, so the Marlins decided to go with flashy young Quilvio Veras as their second baseman and sent Barberie to the Baltimore Orioles for relief pitcher Jay Powell in December 1994, while the strike was still unresolved.

Barberie was the Orioles' regular second baseman early in 1995, but lost the job in midseason due to his poor hitting (a .241 average with little power). He became a free agent after the season and signed with the Chicago Cubs as a backup infielder. He played only 15 games for the Cubs in 1996 before being sent to the minor leagues after obtaining one hit - a home run - in 34 at bats. His last season in organized baseball came with the Oklahoma City RedHawks in 1998, the Triple A affiliate of the Texas Rangers.

Bret's father, Edward, played in the minor leagues. Bret was married to television personality Jillian Barberie from 1996 to 2002.