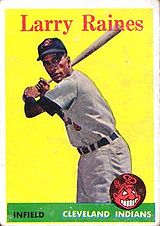 Larry Raines, who played in Japan and then in Major League Baseball and then again in Japan, was an all-purpose backup with the Cleveland Indians in 1957, appearing in 96 games.

While on leave from military service, former Negro Leaguer Raines signed with the Hankyu Braves in 1953. He spent two years in Japan before returning to the United States with the Indians.

Raines debuted with the Indians in 1957, becoming the first former Nippon Pro Baseball player to play in the major leagues. After another year with the Indians and some time in the minors, Raines returned to the Braves in 1962.

Larry hit over .300 three times in the minors, mostly notably with the Indianapolis Indians in 1956 when he led the American Association in triples (14) and stolen bases (22). Larry also led the International League with 32 stolen bases in 1959 while playing for the Toronto Maple Leafs.