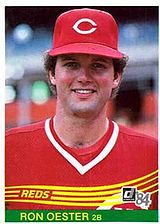 Ron Oester played 13 seasons in the major leagues, all with his hometown Cincinnati Reds. He was the team's starting second baseman from 1980, when he saw his first extended playing time as a rookie, until 1986. He then stayed another four seasons as a back-up, with the highlight of his career coming when the Reds won the World Series in his final season, 1990.

As of 2010-2011, Oester was the Minor League Defensive Coordinator for the Chicago White Sox. His son Jake Oester began his professional career with the ChiSox system.