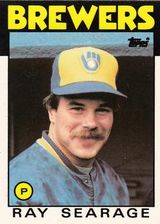 Searage began his coaching career in the Cardinals minor league system, spending time with the Madison Hatters (1994), Peoria Chiefs (1995-1996), and Prince William Cannons (1997). He then spent 1998 with the Hudson Valley Renegades and two years as a coach with the AA Orlando Rays before serving as the Florida Marlins Minor League Pitching Coordinator in 2001 and 2002. Since 2003, he has worked in the Pittsburgh Pirates organization, where he coached the Williamsport Crosscutters in 2003-2004, the Hickory Crawdads in 2005, the Altoona Curve in 2006-2007 and the Indianapolis Indians in 2008-2009. In 2010, he became a coach for the Pirates.

Under Searage's tutelage, the Pirates were very successful in turning pitchers with live arms but a spotty success record to new heights. Among those who experienced a positive turnaround were veterans A.J. Burnett and Francisco Liriano, but also pitchers for whom success had been more elusive, like J.A. Happ and Ivan Nova­. His success also extended to relievers such as Jason Grilli and Mark Melancon. However, he was fired after the 2019 season, shortly after long-time manager Clint Hurdle.

His son, Ryan Searage, played in the Pirates farm system for two years.