"Cecil Cooper can beat you with a home run or a flare to left or a bunt. And he can field his position. You have guys who can hit home runs and guys who can hit singles. But not many can do both. Cecil can." - Sal Bando 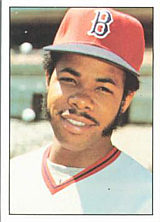 Once dubbed the "Rodney Dangerfield of Baseball" by Baseball Digest for the lack of praise lavished upon him, Cecil Cooper was an under-the-radar star for 17 seasons, primarily with the Milwaukee Brewers. Coop was a five-time All-Star, three-time Silver Slugger and two-time Gold Glove winner.

Unfortunately for Cecil, "Boomer" George Scott owned first base for the Red Sox, having been the regular there since 1966. The Red Sox traded Scott after the 1971 season, but inexplicably chose to deal relief ace Sparky Lyle to the New York Yankees and put Danny Cater at first base, where he hit .237 in 1972. The Red Sox were full of strong performers, such as Carl Yastrzemski, Reggie Smith, Luis Aparicio, Ben Oglivie, Carlton Fisk, Dwight Evans, Rico Petrocelli, and Tommy Harper and came within a half-game of winning a division title in 1972. The pitching staff included Luis Tiant and Bill Lee. Cecil was back in the minors that year, this time in Triple A with the Louisville Colonels, where he hit .315/~.372/.468 with 31 doubles, 9 triples and 10 homers, making another All-Star team. He lost the International League batting title to Al Bumbry but led the league in doubles and hits (162). He came up to the parent club for 12 games, hitting .235/.316/.294. In 1973, back in Triple A at Pawtucket, he hit .293/~.364/.458 with 15 home runs and made his third minor league All-Star team. He was second in the IL again in average, trailing teammate Juan Beniquez by five points, and even stole 11 bases in 12 tries.

Cecil finally came up for good in August. The designated hitter position had been created and Orlando Cepeda was being used there, while Carl Yastrzemski played first base more than anyone else. Cooper played 30 games, hitting .238/.284/.347 with 3 home runs. Despite that modest performance, the next year, 1974, he was up for the whole year as he had nothing left to prove in the minors. He played 121 games and batted .275/.327/.396 with 8 home runs. He and Yastrzemski split the first base duties, and Cooper played some designated hitter along with Tommy Harper. In 1975, Cooper surged forward. In 106 games, he posted averages of .311/.355/.544, used at DH more than at first base while batting a lot of lead-off. In the World Series, he went 1-for-19 against the Cincinnati Reds. The next year, 1976, his last with the Red Sox, he slipped a bit to .282/.304/.457 with more playing time, belting 15 home runs and driving in 78 runs. While Cooper had shown a lot of talent, he had not truly broken through. He would get to do that with the Milwaukee Brewers, traded to The Good Land for the returns of Bernie Carbo and... "Boomer" George Scott, who had blocked his path to the Red Sox years prior and was now making a return engagement to Fenway Park.

Joining Milwaukee, he was surrounded by a lot of raw offensive talent that was about to break out. Future Hall of Famer Robin Yount was just getting started and would be joined by Paul Molitor in 1978. Stormin' Gorman Thomas was about to earn regular playing time and crush a lot of long balls. Ben Oglivie, a former teammate in Boston, also would bring his big bat to town in 1978 as part of a deal with the Detroit Tigers. Additionally, Coop made an adjustment upon joining his new digs. He altered his batting stance to more closely resemble that of Rod Carew, perhaps the best hitter in the game at the time. In 160 games with the new stance in 1977, Cecil began a string of seven consecutive .300 seasons, batting .300/.326/.463 with 20 home runs, 78 RBI and 86 runs scored. Missing time in 1978, he still checked in at season's end with a .312/.359/.474 batting line. In 1979, he made his first All-Star Game appearance, leading the AL in doubles (44) while batting .308/.364/.508 with 24 home runs, 106 RBI and 83 runs scored.

Cooper's season for all-time was 1980. On April 12th, in the second game of the season, he and another Brewer icon, Don Money, became the fourth set of teammates in history to belt grand slams in one inning, victimizing Mike Torrez and Chuck Rainey of the Red Sox en route to an 18-1 romp at County Stadium. Cecil proceeded to bat better than .300 every month, on his way to a second All-Star appearance and a .352/.387/.539 line, finishing second to George Brett in the batting race. He could hang his hat instead on leading the league in RBI (122) while belting 33 doubles and 25 home runs with a career best 219 hits. Of course, that was the season when Brett flirted with batting .400, so he completely obscured Cooper's great year.

Overall, Cecil batted .298/.337/.446 with 241 home runs, 415 doubles, 1,012 runs scored and 1,125 RBI. He was not great at drawing walks, but he did hit 30-plus home runs twice and drive in 100-plus runs four times. He finished in the top ten in MVP voting four times and was among the top five in batting average in several seasons. In 2002, he was an inductee of the Miller Park/Milwaukee Brewer Walk of Fame. The most similar player, according to similarity scores, was New York Yankees first baseman Don Mattingly.

During most of 1988-1996, Cooper worked as a player agent. From 1997-2001, he worked in various capacities in the Brewers organization, including Farm Director from 1997 to 1999. He was a Brew Crew coach in 2002 and managed the Triple A Indianapolis Indians in 2003 and 2004. In 2005, he became a Houston Astros coach under Phil Garner, whom he had worked with back in Milwaukee. Cecil became interim manager of the Astros on August 28, 2007 when Garner was fired and was given the manager's job on a full-time basis shortly afterwards. The Astros did surprisingly well in 2008, finishing 9 games above .500, and started 2009 on the same note. With the Cubs, Cardinals and Brewers all hovering around .500, the Astros were suddenly in the middle of the division race in early August, but the thrill ended as quickly as it had begun: the Cardinals got hot, Houston cooled down and by mid-September, the dream was over. With Houston in a seven-game losing streak, Cooper was fired on September 21st and replaced by third base coach Dave Clark.