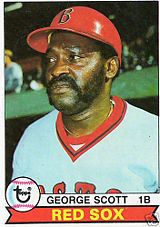 He made his major league debut in 1966 as an everyday player for the Boston Red Sox, getting into 162 games and hitting 27 homers. He set a major league record by needing only 21 games to hit his first 10 career homers; Trevor Story tied the mark in 2016, then Rhys Hoskins obliterated it in 2017, needing only 17 games. He was third in the 1966 American League Rookie of the Year Award voting, behind winner Tommie Agee.

After his major league days, he played and managed in Mexico. An article, George Scott is Alive and Well and Playing in Mexico, chronicled his life there. He was inducted into the Boston Red Sox Hall of Fame in 2006.