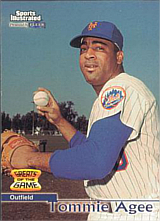 "...Tommie was my kind [of guy] -- a rugged, good-natured guy [with] as much raw talent as any ballplayer I ever met and he was always good company, ready to go anywhere and not given to quarreling." - Tommy John, from The Sally and Tommy John Story

Outfielder Tommie Agee was best known for his stellar defense and his performance with the New York Mets during the 1969 World Series.

After growing up in Mobile, Alabama with future Mets teammate Cleon Jones, Agee attended Grambling State University. He was signed by the Cleveland Indians and given a $60,000 bonus. After disappointing cups of coffee in the majors with the Tribe from 1962 to 1964, they traded him to the Chicago White Sox (along with Tommy John) prior to the 1965 season. He suffered a broken hand in his first spring training with the Sox, limiting his playing time. His injury behind him, Agee started in center field against the California Angels on Opening Day 1966 and hit a home run off Dean Chance. Overall, he hit .273 with 22 homers and 44 stolen bases that year, earning a Gold Glove and the American League Rookie of the Year Award. He also became the first White Sox player to hit 20 home runs and steal 20 bases in a single season.

Following a sophomore slump with the Sox, Agee was traded to the New York Mets for Tommy Davis. He struggled in his first year in New York, batting just .217 with 17 RBI and an 0-for-34 stretch in April. He bounced back in 1969, hitting .271 with 26 home runs as the Miracle Mets won the National League pennant. In the World Series against the Baltimore Orioles that fall, he was the star of Game 3, hitting a home run off Jim Palmer and making two spectacular catches that saved a total of five runs. In 1970, he had another great year, hitting .286 with 24 homers and earning his second Gold Glove. When his production fell off considerably in 1972, Agee was traded to the Houston Astros for a pair of minor leaguers. After only half a season in Houston, he was sent to the St. Louis Cardinals in exchange for infielder Dave Campbell. Following the 1973 season, he was sent to the Los Angeles Dodgers for reliever Pete Richert but was released by the Dodgers before the season began. He never played in the majors again.

Agee primarily wore number 20 during his career (in his time with the Mets and Astros). He died of a heart attack in 2001 at age 58, and was posthumously inducted into the Mets Hall of Fame the following year.