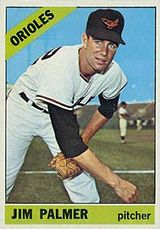 Inducted into Hall of Fame in 1990

"Jim had one of the most beautiful deliveries I've ever seen. It was almost like watching ballet." - Ray Miller, former Orioles pitching coach

In the year that Mike Flanagan won the Cy Young Award, someone asked him about another Baltimore pitcher, Jim Palmer, who had earned the same honor years earlier: "Yeah, Palmer is Cy Old," Flanagan replied, without cracking a smile.

Right-hander Jim Palmer spent his entire career with the Baltimore Orioles and was arguably the best pitcher of the 1970s. He won three Cy Young Awards (1973, 1975, and 1976), was named to six All-Star Games, and won 20 games eight times. In 1983, he notched a final World Series win for the Orioles, but the next season, his ERA was over 9.00 and he was released. He attempted a comeback in 1991, after he had been inducted in the Hall of Fame, but it fizzled out in spring training.

He was elected to the Baseball Hall of Fame on January 9, 1990 by the Baseball Writers Association of America. His #22 was retired by the Orioles in 1985, a year before he was inducted into the team's Hall of Fame alongside teammate Ken Singleton. In 2012, the Orioles unveiled a statue of his outside Oriole Park at Camden Yards, where his likeness joined that of other franchise greats, including manager Earl Weaver. Since his playing career ended, he has remained in the Oriole family, working as a television broadcaster for the team.

He became the only pitcher to give up three home runs in an All-Star Game, doing so the 1977 All-Star Game. But despite four times in the league's top 10 for home runs allowed and a long career, Palmer never gave up a grand slam during his career. This was not by accident: he explained that he would rather give up a walk with the bases loaded than a long hit, and would deliberately nibble around the plate in such situations, never challenging the hitters directly. It may have given his manager gray hair, but it worked.

He was adopted at birth by a rich New Yorker named Moe Wielsen, but his adoptive father died when he was 8 and he moved to California with his mother, who remarried actor Max Palmer. The family moved to Arizona before high school and he was briefly at Arizona State University before signing his first pro contract.

In addition to his playing career, Palmer is known for appearing in ads for Jockey underwear and The Money Store. He got his nickname "Cakes" for his love of eating pancakes, especially on days he was starting.