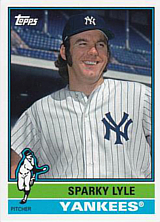 "Ted Williams told me that I'd never make the big leagues unless I came up with a slider. . . after I perfected the slider . . . I threw the pitch so it would come straight at the batter until it got to within three feet of the plate. Then it would break down." - Sparky Lyle, saying that "when Ted Williams told you something, you tried it"

"The best soap opera was the [Yankees] team we had here in the 70s... [People] couldn't wait to pick up the papers the next morning to see what was going on." - Ron Guidry, about the Yankees during the era of Sparky Lyle's book The Bronx Zoo

Sparky Lyle, who pitched sixteen years in the majors solely in relief and who won the 1977 American League Cy Young Award (the first reliever to do so in the American League), was one of the best-known relievers of his era. He consistently was among the league leaders in saves and his interactions with other New York Yankees players and management were well-publicized.

Lyle came up originally at age 22 with the Boston Red Sox in 1967. Reggie Smith, in his first full season with the Red Sox, was also 22, and Ken Brett, at age 18, made his major league debut with the same team. During spring training 1972, he was sent to the New York Yankees in a dreadful deal that brought a fading Danny Cater to Boston, blocking future All-Star Cecil Cooper at first base.

Sparky spent the heart of his career, 1972 to 1978, with the Yankees. He appeared in the 1976 and 1977 World Series, with an overall ERA of 1.23. He was credited with the win in Game 1 of the 1977 Series. After Sparky won the Cy Young Award in 1977, the Yankees signed Rich Gossage as a free agent. Both relievers pitched well over 100 innings as the Yankees repeated as World Champions in 1978, but Gossage got most of the save opportunities. After the season, the Yankees sent Lyle to the Texas Rangers in a multi-player trade that brought over Dave Righetti, among others. In the tradition of Ball Four by Jim Bouton, Lyle authored (with Peter Golenbock) The Bronx Zoo, a 1979 tell-all of his trials and tribulations as a member of the Yankees in that 1978 season.

Although he was on the Red Sox in 1967 and the Philadelphia Phillies in 1980, teams that went to the World Series, Lyle did not appear in those Series. The Phillies acquired him too late to qualify for the postseason roster in 1980.

He led the American League in saves in both 1972 and 1976. He was named one of the ten best relievers according to The Relief Pitcher for being the most dominant reliever of his era. His lifetime Adjusted ERA+ of 127 is tied for 49th on the all-time list with turn of the century hurler Jack Pfeister and one point higher than former teammate Goose Gossage at 126. As pitchers go, he was a good hitter, with a .192 lifetime average. He even stole a base at age 36.

Lyle was a world-class prankster during his playing days. His trademark prank involved leaving an imprint of his rear end on birthday cakes prepared for his teammates, retiring from the practice after fearing that someone would one day prepare a cake with a needle baked inside that he'd sit on. He was also one of the premier practitioners of the hotfoot.

Sparky was one of the first relievers to have entrance music signifying they were entering the game. Much like professional wrestling all-time great "Macho Man" Randy Savage, his music was "Pomp And Circumstance".

After he retired from baseball in the 1980s, he did some Miller Lite beer commercials and worked as a casino greeter with Mickey Mantle. He was manager of the Somerset Patriots of the Atlantic League from their inaugural season of 1998 through the 2012 season. He then stepped down to take an ambassador role for the team, earning the title of manager emeritus.

Two of the sources: Baseball Digest, February 2003 and The Bronx Zoo, 30 years later.