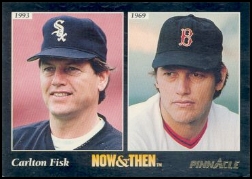 Inducted into Hall of Fame in 2000

"It's not what you achieve, it's what you overcome. That's what defines your career." - Carlton Fisk

Born in Vermont but proudly raised in New Hampshire, Carlton Fisk had one of the longest careers among catchers in baseball history.

Fisk was a standout athlete in several sports at Charlestown High School (Class of 1965). In fact, his dream was to play for the Boston Celtics. He attended the University of New Hampshire on a basketball scholarship. Two years later, he was picked in the first round (4th overall) by Boston; the Boston Red Sox that is, in the January 1967 amateur draft.

After five at bats at the end of the 1969 season, Fisk spent 1970 and most of 1971 in the minor leagues. He was the starting catcher and Rookie of the Year in 1972. In 1974, Fisk suffered a devastating knee injury. Many believed the torn ligaments would end his career, but he eventually came back. Injuries continued as he did not make his 1975 debut until June 24th due to a broken thumb.

Fisk's signature moment, and one of the signature moments in Major League Baseball history, came early on the morning of October 22, 1975. In the 12th inning of Game 6 of the World Series, Fisk hit a walk-off homer off Pat Darcy of the Cincinnati Reds, tying the Series at 3-3. In the famous clip, Fisk waved his arms frantically willing the ball to stay fair as it cleared the Green Monster while staying right of the left field foul pole at Fenway Park. View a video of "The Homer": The Homer, Carlton Fisk, 1975 World Series.

Fisk remained with Boston until 1980. He signed with the Chicago White Sox as a free agent for the 1981 season. He had become a free agent because the Red Sox made a clerical mistake, mailing him his contract after the cut-off date, in an attempt to avoid having him qualify for salary arbitration.

There was quite a controversy in 1986 when the White Sox decided to put Fisk in left field. The White Sox had a plethora of catching arms, and that may have been the reason. However, Fisk had rarely played outfield before and was there for only 31 games, during which he made 4 errors. The decision and controversy may have been part of the reason why the Sox dumped manager Tony LaRussa, who was at the helm for 64 games that season.

With the White Sox, Fisk set several league records. He set the major league record for games caught (2,226, broken by Ivan Rodriguez in 2009) and home runs by a catcher (351, since broken). He set a slew of age-related records, including home runs by a player over age 40 (72) and oldest player to get a hit in an All-Star Game (43 years old in 1991). In 1990, he became one of only a handful of players to play in the major leagues in four different decades. When he hit a grand slam on October 3, 1991, he became the oldest player to slug one. He caught his last game at age 45 - when he was rudely dumped by the White Sox in midseason, six days after he broke the record for games caught (in what turned out to be his final game).

Fisk was elected to the Baseball Hall of Fame on January 11, 2000 by the Baseball Writers Association of America.

In 2005, Fisk was feted at Fenway Park where the left field foul pole was renamed "The Fisk Foul Pole." Also, a statue of Fisk was unveiled in August 2005 at New Comiskey Park in Chicago. His uniform number 27 has been retired by the Red Sox (in 2000) as has his 72 with the White Sox (in 1997). He was an inductee of the Boston Red Sox Hall of Fame in 1997. The Red Sox kept inviting Fisk to throw out the first pitch in Game 6 of a World Series, but they swept both the 2004 World Series and 2007 World Series; he finally got his chance in the clincher of the 2013 World Series.

"Just being around a guy like (Fisk) makes a difference. It's his attitude, his presence." Ozzie Guillen

In 1985, Fisk was credited with two putouts in a play often seen on bloopers videos. On August 2nd at Yankee Stadium, Rickey Henderson hit a long fly ball to center field. Although he made a fine effort, Luis Salazar missed the ball. He recovered to throw to Ozzie Guillen who relayed to Fisk. Yankees baserunner Bobby Meacham tripped and he was quickly followed by Dale Berra, who had run through the stop sign at third base. Fisk tagged out Meacham only to turn around to see Berra coming, so he tagged him for an 8-6-2 double play.

On October 22, 2012, Fisk was charged with DUI in New Lenox, IL after being discovered unconscious at the wheel of his vehicle in the middle of a corn field. He pled guilty to the charge two months later.