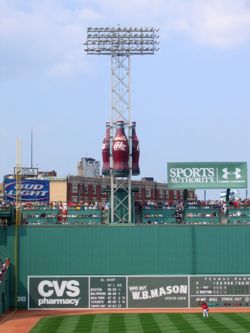 The Green Monster is the common name for the left field wall at Fenway Park, in Boston, MA, whose height is 37 feet.

When the wall was first built during the 1934 renovation, it was plastered with advertising. This was painted over in forest green in 1947, giving the wall its nickname. A manual scoreboard is located in the base of the wall. Since the late 1990s, advertising (in tasteful green and white) has flanked the scoreboard.

The Green Monster has a direct effect on game play, because of its unique configuration. It stands unusually close to home plate and is unusually high. The result is that it is impossible to hit a line drive home run to left field at Fenway Park, as any well-hit ball just crashes into the wall, but on the contrary what would be a routine fly ball in any other park has a chance of clearing the fence if hit sufficiently high in the air. The left fielder has a much smaller area of the field to cover than in any other ballpark, but must play tricky bounces off the wall in order to prevent a surfeit of doubles and triples. Hall of Famer Carl Yastrzemski was particularly skillful at this, picking balls off the wall and firing into second or third base to catch unwary baserunners who had not realized how much closer the Green Monster is to the bases than any other outfield fence in the Major Leagues. 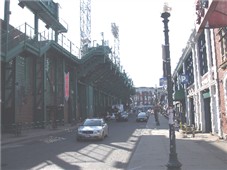 In the early 2000s, a few rows of choice seats were built atop the Green Monster. While the move by the Boston Red Sox was derided at first as profit-driven, most observers have turned around to see it as an addition to the historic ballpark that is both tasteful and practical, providing a great view of the playing field without spoiling the park's unique and historic features.

Beyond the Green Monster is a large illuminated sign advertising the CITGO brand of gas stations. While not part of Fenway Park, and barely visible from inside it, it is clearly apparent in television broadcasts and has become a prized landmark in Boston, even winning historical landmark status after its survival was endangered by a civic drive to ban outsized advertising billboards in the city.

The Red Sox's furry mascot, Wally the Green Monster, derives his name from the wall. 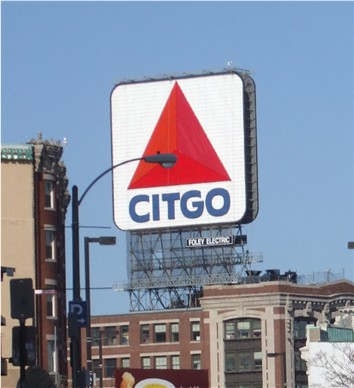