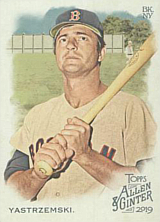 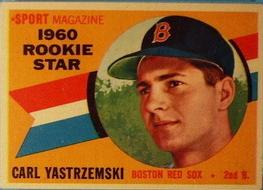 Carl Yastrzemski (known as "Yaz") was a Hall of Fame outfielder who played his entire career with the Boston Red Sox. An eighteen-time All-Star, Yastrzemski was the last man to win a Triple Crown in Major League Baseball in the 20th Century; the next Triple Crown winner would be Miguel Cabrera, in 2012.

Yaz had one of the longest careers in major league history, appearing in 3,308 games over 23 seasons. He shares the record for most years with the same team, tied with career Baltimore Orioles third baseman Brooks Robinson. He is second on the all-time list for games played, and third in at-bats. A top hitter who led the American League in numerous categories, including batting average three times and on-base percentage five times, he was also an excellent fielder, winning seven Gold Gloves. In two World Series appearances he hit a robust .352.

He won the 1967 American League Triple Crown; not only that, he was at his best down the stretch, when he carried the Red Sox to a miracle pennant in an epic four-team race that was not decided until the season's final day. He won the league's MVP Award that year. He was the last batter for 45 years to win a Triple Crown, a feat that later became much more difficult due to the greater number of regular players in each league as a result of expansion. Many fans remember him just as much for leading the American League in 1968 with a .301 batting average. It was the bottom of the second dead-ball era, and he was the only player in the league who hit .300. After those years of early dominance, he settled into being a good, but not exceptional player for more than a decade, finally retiring after the 1983 season. He was still Boston's best-known player in those years, but Fred Lynn, Jim Rice and Dwight Evans were the team's most dangerous offensive weapons.

Originally a left fielder, he replaced the great Ted Williams at the position when Williams retired after the 1960 season, he was known for his ability to play Fenway Park's Green Monster and cut off opposite baserunners on the basepaths. He played more often at first base and DH in the latter part of his career. He had a highly distinctive batting stance that had him holding the bat vertically above shoulder height as the pitcher began his windup; it is jokingly said that he ruined thousands of New England boys' hitting prospects as they tried to imitate their hero's highly unorthodox stance. It worked for him, though: he holds the record for most career hits without ever collecting 200 hits in a single season.

Despite winning a home run crown in his Triple Crown year and three times hitting over 40 in a season, he had only one three-homer game in his career. It came on May 19, 1976, against the Detroit Tigers at Tiger Stadium, in a 9-2 win.

Carl's parents were Carl Yastrzemski Sr. (Yaz and his father did not share the same middle name) and Hattie Skonieczny. He is the father of Carl Michael Yastrzemski, Jr., and the grandfather of Mike Yastrzemski. The elder Mike played in the minors, while his grandson reached the major leagues in 2019. Ironically, it took the younger Mike only 70 career games to have a three-homer game.

His first baseball Card appearance was in the 1960 Topps set. He was elected to the Baseball Hall of Fame on January 9, 1989 by the Baseball Writers Association of America. He was a part of the inaugural class of the Boston Red Sox Hall of Fame in 1995 and had his number #8 retired in August 1989. On September 22, 2013, the Red Sox unveiled a statue depicting him raising his batting helmet in salute outside the right field entrance at Fenway Park.