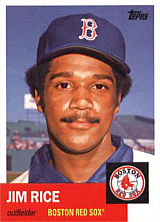 Inducted into the Hall of Fame in 2009

Jim Rice played 16 seasons in the major leagues, all of them with the Boston Red Sox. He hit 382 home runs, accumulated 1,451 RBI and had a career batting average of .298. Rice also won the American League MVP Award in 1978, and was elected as a member of Baseball's Hall of Fame in 2009 after making his 15th (and final) appearance on the BBWAA ballot, receiving 76.4% of the votes cast where 75% of the votes are needed for an induction. A Boston Red Sox Hall of Fame inductee in 1995, Rice became the 4th player elected to the Hall of Fame in what would have been his final appearance on the BBWAA ballot, joining Red Ruffing (1967 runoff), Joe Medwick (1968) and Ralph Kiner (1975).

Rice was named the 1974 Minor League Player of the Year after he became the International League Rookie of the Year, Most Valuable Player, and Triple Crown winner when he played for the Pawtucket Red Sox. That year, Rice hit .337 with 25 homers and 93 RBI, edging Gary Carter of Memphis by 2 homers. Rice also led the league in slugging (.579), as he was the only player to top .500. In 2008 he was elected to the International League Hall of Fame. He was generally called "Jim Ed Rice" in the minors.

After making his major league debut late in the 1974 season, in 1975 Rice was third in the balloting for MVP and runner-up for Rookie of the Year honors in the American League to Boston Red Sox teammate Fred Lynn. Unfortunately, Rice missed the classic 1975 World Series, having suffered a broken bone in his hand when he was hit by a Vern Ruhle pitch in late September.

Rice won his first American League home run title in 1977, when he belted 39 round-trippers. In 1978 Rice was the AL MVP. He was one of the only players of that era with 400 total bases in a season. His 46 home runs that year were the highest total in the AL between 1970 and 1987. He led the league in homers again in 1983, with a total of 39. After finishing 3rd in the MVP voting in 1986, Rice's team was able to return to play in the memorable 1986 World Series where Rice batted .333. Over his career Rice was among the top 5 yearly leaders 69 times in various batting categories, and he finished as the leader 21 times in 13 of these offensive categories. In 1987, Rice began to lose his power and his performance declined quickly. He retired from baseball in 1989 after playing his entire career for the Red Sox.

There were however a few things working against him, which delayed his election to the Hall of Fame: his decline came early and swiftly, preventing him from compiling larger career numbers; his defense was always suspect, and he spent a lot of time as a designated hitter to keep away from the field (at a time where the stigma against designated hitters on the BBWAA ballot was much stronger). Rice drew relatively few walks; and year after year, he was among the AL leaders for grounded into double plays, something which significantly reduced his offensive value.

After his MLB playing career[edit]

In 1989, Rice played for the St. Petersburg Pelicans of the Senior Professional Baseball Association. In 1990, he again was with St. Petersburg. He was batting .292 with 3 home runs and 7 RBI in 15 games when the league folded.

Rice has served as a roving batting coach (1992-1994) and hitting instructor (1995-2000), and remains an instructional batting coach (2001-present) with the Boston Red Sox organization. He is employed as a commentator for the New England Sports Network (NESN). In 1995, he was chosen as a member of the Red Sox Hall of Fame, and in 2001, he was elected to Ted Williams' Hitters Hall of Fame. On January 12, 2009 Jim was elected to Baseball's Hall of Fame after gathering 76.4% of the vote and became the 21st left fielder ever inducted. Rice became just the third player to be bypassed by voters for 14 years before squeezing in by a slim margin on his final try; the previous two such picks were Jim Bunning and Ralph Kiner. On July 28, 2009, Jim had his #14 retired by the Red Sox.

Jim was perhaps the first (and to date only) Hall of Famer to reveal in their HOF acceptance speech that they were enjoying the daytime soap The Young & The Restless upon receiving the call to the Hall.

Rice was named to the All-Star team 8 times during his 16 year career, and was in the top 5 for the MVP award six times. Aside from Rice's notable achievements (listed below) he also led the league in GIDP 4 years in a row, and strikeouts once (1976). He was in the top ten in slugging percentage 8 times, batting average 6 times, hits and home runs 7 times, RBI & total bases 9 times, and on base percentage twice. His highest seasonal Adjusted OPS (OPS+) was 158, he also had a 148 and a 141.

Through 2019, he is among the top 100 all-time when it comes to total bases, home runs, runs batted in and sacrifice flies. Rice is also among the top 50 all-time in MVP Shares and grounding into double plays. The most similar player to Rice, according to the similarity scores method, is fellow Hall of Famer Orlando Cepeda, followed by Andres Galarraga, Ellis Burks, Duke Snider, Joe Carter, Dave Parker, Billy Williams, Luis Gonzalez, Willie Stargell, and Chili Davis.

Rice was the highest-paid player in baseball for two seasons, which indicates the value that was placed on him at that time. The league's individual average for OPS was .742 during the era that Rice played. Rice's career OPS was .854. Aside from that, Rice's career batting average of .298 is higher than the league average of .270. Also, his lifetime slugging percentage of .502 is much higher than the league's .406. His career 128 Adjusted OPS+ compares well to that of his left field predecessor, Carl Yastrzemski, who had a career mark of 130. It should be noted when comparing their careers, Yastrzemski had 4,933 more plate appearances and 966 more hits while playing in 7 more seasons than Rice.