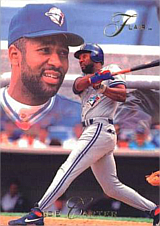 “The man’s an RBI machine... He’s unbelievable. Every time you looked up, it seemed he was knockin’ someone in. He cranks out RBI like no one I’ve ever seen, game after game. Like a machine.” - Brett Butler 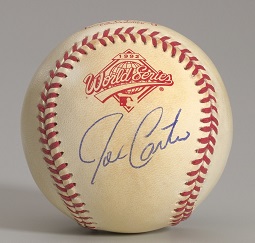 Joe Carter hit 396 home runs and drove in 1,445 runs during a 16-year major league career. He was a five-time All-Star and is most famous for his play with the Toronto Blue Jays World Series championship clubs.

Carter was an All-Star outfielder in the 1979 Intercontinental Cup, helping Team USA win Bronze. He was chosen by the Chicago Cubs in the first round of the 1981 amateur draft with the second overall pick. He made his pro debut with the Midland Cubs in 1981 and reached the majors with Chicago in 1983, hitting .176 in 23 games. After starting 1984 with the AAA Iowa Cubs, Carter was dealt to the Cleveland Indians in June as part of a seven-player trade that brought Rick Sutcliffe to Chicago. By 1986, he had become a star, hitting .302 with 29 home runs while leading the American League with 121 RBI. The following year, he became a member of the 30-30 Club, when he hit 32 homers while stealing 31 bases.

Following the 1989 season, Carter was traded to the San Diego Padres for Sandy Alomar Jr., Carlos Baerga and Chris James. One year later, he moved to Toronto alongside Sandy's brother, Roberto, for Fred McGriff and Tony Fernandez in a trade that turned the Blue Jays into a powerhouse. Carter was a five-time All-Star with the Jays and a key member of their World Series winners in 1992 and 1993. He ended the 1993 World Series with a dramatic three-run walk-off home run off Mitch Williams of the Philadelphia Phillies, perhaps the most dramatic moment in big league history. Carter drove in 102 runs in 1997, becoming only the ninth player in baseball history to reach 100 RBI in ten separate seasons. He moved to the Baltimore Orioles as a free agent the next year and was traded to the San Francisco Giants for Darin Blood in the middle of the season, retiring at year's end.