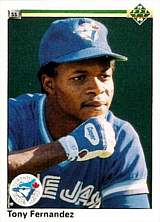 Shortstop Tony Fernandez was a five-time All-Star and earned four Gold Gloves during a 17-year career, primarily spent with the Toronto Blue Jays.

Fernandez was originally signed by the Blue Jays by scout Epy Guerrero in 1979, and he made his pro debut with the Kinston Eagles the following summer. He reached the majors as a September call-up in 1983, hitting .265 in 15 games for Toronto. After spending 1984 as Alfredo Griffin's backup, he took over as the Jays' regular shortstop in 1985 following Griffin being traded away. He hit .333 in the 1985 ALCS as Toronto fell to the Kansas City Royals.

Following the 1990 season, Fernandez was part of a blockbuster trade, going to the San Diego Padres with Fred McGriff for Roberto Alomar and Joe Carter. He spent two seasons with San Diego, appearing in the 1992 All-Star Game, before being traded to the New York Mets for three players following the 1992 campaign. After half a season with the Mets, he was traded back to Toronto for Darrin Jackson just in time for the 1993 pennant run. He hit .306 in 94 games for the Jays that summer, and then hit .333 with 9 RBIs in the World Series as his club went on to win the crown against the Philadelphia Phillies.

Fernandez was signed by the Cincinnati Reds for 1994, and he moved to third base, hitting .279 in 104 games for the team. He moved on the New York Yankees in 1995 and spent one summer as their primary shortstop before missing the entire 1996 season due to an elbow injury, opening the door for Derek Jeter to take over at short. He signed with the Cleveland Indians for 1997 and held down second base for the pennant-winning club. He hit .471 in the 1997 World Series but made a key error in the 11th inning of Game 7 that allowed Craig Counsell of the Florida Marlins to get on base and ultimately score the Series-winning run.

Fernandez returned for a third go-round in Toronto in 1998 and hit .321 and .328 (his highest averages in more than a decade) in two seasons with the club. He played for the Seibu Lions in Japan in 2000, hitting .327. He signed with the Milwaukee Brewers in 2001 but was released in late May. He then finished up his career back with the Blue Jays, hitting .305 in a 48 game swan song.

Fernandez ended up with a lifetime .288 batting average, and a .395 mark in two World Series. After four separate stints with the Blue Jays, he holds club records for hits (1,583) and games played (1,450) through the 2019 season. He was voted into the Canadian Baseball Hall of Fame in 2008 and is also a member of the Toronto Blue Jays Level of Excellence.

In 2016, Tony was a special coach with the Texas Rangers. He was diagnosed with serious kidney disease in 2017 and in February 2020, it was reported that he was in critical condition. He passed away a few days later, aged 57, following a stroke caused by his chronic kidney issues.

Fernández' son Jonathon Fernández signed with the Blue Jays as a 34th round pick in the 2009 amateur draft.