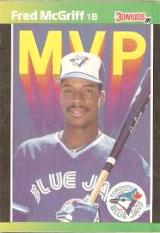 Fred McGriff played 19 seasons in the majors, finishing with 493 home runs, exactly the same as Lou Gehrig. Although Fred never won an MVP award, he finished first in the American League in Adjusted OPS in 1989.

From 1992 to 2008, McGriff held the unusual distinction of being the last player in both the American and National Leagues to lead the league in home runs while hitting less than 40. McGriff hit 36 as a member of the Toronto Blue Jays in 1989, then 35 in 1992 as a member of the San Diego Padres. Miguel Cabrera led the AL with 37 in 2008. McGriff was the last person in the NL to do so until Matt Kemp led the 2011 NL with 39 homers. This distinction explains to some extent while his career has been underrated: he was the best slugger of the generation just before the home run boom that started in the late 1990s, and was too old to benefit much from it. As a result, he fell just short of the 500 home run club and his power numbers look superficially unimpressive in comparison with hitters who followed him, even though they are in fact better when taken in context.

Fred was signed as a 9th round pick in the 1981 amateur draft by the New York Yankees and scout Gus Poulos, but was traded to the Blue Jays a little over a year later, when he was still in the minors, as part of a five-player deal whose marquee names at the time were OF/1B Dave Collins and P Dale Murray. On December 5, 1990, he was involved in one of the most important trades of the period when he and SS Tony Fernandez were sent to the Padres in return for 2B Roberto Alomar and OF/1B Joe Carter. The deal is often seen as a major win for the Blue Jays, because Alomar went on to a Hall of Fame career and Carter was the hero of the Jays' 1993 World Series win, but in fact all four players were of All-Star caliber and in their prime, something that is quite rare. McGriff played well for San Diego, but was dealt to the Atlanta Braves in mid-season in 1993, when the Padres' management showed their frustration with their star-laden team's inability to win a division title by conducting a fire sale. The Braves gave up three youngsters for McGriff, none of whom amounted to much. In contrast, McGriff became a fixture in the middle of the Braves' line-up and played with them in four postseasons, including being a key member of the 1995 team that defeated the Cleveland Indians in the 1995 World Series.

In 1998, McGriff was purchased from the Braves by the expansion Tampa Bay Devil Rays, who were looking to gain quick respectability by adding a number of big-name players (Wade Boggs and Alex Fernandez were others who joined the team at the same time). McGriff was considered the key acquisition, because he was a local Tampa, FL boy. He did pretty well over his three and a half seasons in Tampa, driving in over 100 runs twice, but the team was mired in last place and he fell into relative obscurity. The Chicago Cubs acquired him midway through the 2001 season and he continued to do well, combining for another 100+ RBI season between the two teams and following that with a season of 30 homers and 103 RBIs in 2002, when he was 38 years old. However, the Cubs did not retain his services after the season, and he ended up as a part-time player with the Los Angeles Dodgers in 2003. Just 9 homers shy of the magic 500 mark, he signed back with Tampa Bay in 2004, but at age 40 he had little left in the tank; he hit 2 homers and struggled with a .181 batting average in 27 games before being handed his unconditional release on July 28th. He ended up with 493 homers and would likely have cleared 500 were it not for the 1994 strike, which occurred when he was at his peak as a power hitter.

While the homers are what McGriff is mainly known for, he was a more complete player, as his career batting average is a solid .284 in 19 seasons and over 2400 games. His OPS+ was over 100 every season from his rookie year with the Blue Jays in 1987 until 2002; in fact, his lowest OPS+ during that span was 106 and his career average is an outstanding 134. Even in 2003, when he was well on his decline as a 39-year-old part-time player with the Dodgers, his OPS+ was still a respectable 99, just below average for a first baseman. The most similar players, according to the similarity scores method, are Willie McCovey and Willie Stargell, both unquestioned Hall of Famers. McCovey, who is most similar, only has a similarity score of 887, another sign that McGriff was a truly outstanding player who has not been given enough credit for what he accomplished.

In 2008, McGriff was a Special Advisor for the Tampa Bay Rays. In 2015, he rejoined the Atlanta Braves as a special assistant with duties in the area of professional scouting.

He is a cousin of Terry McGriff and of Charles Johnson.