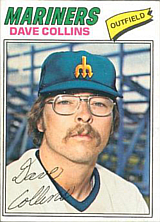 A high school star in baseball, basketball, and track, Collins was drafted twice before being selected by the California Angels in the 1972 amateur draft. He reached the majors with the club in 1975 and was taken by the Seattle Mariners in the 1976 expansion draft. Following the 1977 season, he was traded to the Cincinnati Reds for Shane Rawley. He hit .318/.364/.402 for the team in 1979, and batted .303/.366/.370 while stealing 79 bases in 1980. After the 1981 season, Collins became a free agent and signed a three-year, $2.75 million contract with the New York Yankees, desperately sought for his speed by George Steinbrenner. After just one year, he was dealt to the Toronto Blue Jays in a typically harebrained Yankee deal of the time, moving with a minor league first baseman named Fred McGriff so the Yanks could obtain the immortal Dale Murray. With the Jays in 1984, he hit .308/.366/.444 and stole 60 bases while leading the American League with 15 triples. Dave saw action in six more seasons, playing for the Fort Myers Sun Sox of the Senior Professional Baseball Association in 1989.