The owner of the New York Yankees from 1973, when he bought the team from CBS for $10 million, until his death in 2010, George Steinbrenner was well known for his implication in on-field decisions and his love of firing managers. He hired and fired Billy Martin five times. In later years, he changed that reputation, sticking with Joe Torre as manager from 1996 to 2007. During his ownership of the club, the Yankees won the World Series seven times. 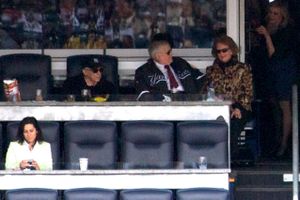 Steinbrenner, 2nd from the right

Steinbrenner was the son of a wealthy shipping magnate from Cleveland, OH. After serving in the United States Air Force at the time of the Korean War, he was an assistant to legendary coach Woody Hayes at Ohio State University, then was a football coach at both Northwestern University and Purdue University. He was also a high school basketball coach at Aquinas College High School. After that, he took over the family shipping business, revitalizing and expanding the company, and also became chairman of the American Shipbuilding Company. He made his first foray into professional sports in the 1960s, taking an ownership stake in the Cleveland Pipers of the American Basketball League. However, the league and team went bankrupt after a season and a half. He then invested in Broadway shows with more success, meeting business partner Robert Nederlander in the process.

Steinbrenner was routinely parodied on the show Seinfeld. His voice was portrayed by the show's co-creator Larry David. He was suspended from baseball twice. The first was for making illegal campaign contributions to Richard Nixon's 1972 presidential campaign, for which he was convicted on August 23, 1974, earning a two-year suspension from baseball from Commissioner Bowie Kuhn, which was later shortened to 15 months. Then, in 1990 he was suspended by Commissioner Fay Vincent for associating with gamblers, particularly an unsavory character named Howard Spira, to damage the reputation of former Yankee Dave Winfield. He was re-instated in 1993. After the 2008 season, weakened by failing health, he stepped down and handed control of the team to his sons Hal Steinbrenner and Hank Steinbrenner although he would continue to make occasional comments to the media.

During his heyday, Steinbrenner was one of the most prominent and controversial figures in American sport. He relished the media attention that came with owning the Yankees, and did everything he could to bring titles to the franchise. That included opening his wallet for major free agent signings, starting with Catfish Hunter in 1975 - hence the common criticism that the Yankees bought their World Series titles - but also being involved in day-to-day decisions concerning the hiring and firing of general managers, managers and coaches, and the acquisition and trade of players. Many contended that his meddling actually decreased the number of Yankee titles, especially in the 1980s, as the unending whirlwind in the front office had a negative impact on the team's on-field performance. He was also known for his love-hate relationship with certain players, especially Reggie Jackson and Winfield. There were other strange incidents, for example his claim during the 1981 World Series that he had been attacked by two Los Angeles Dodgers fans in an elevator in his hotel.

After his second suspension, he took a less prominent role in the team's daily operations, but was outspoken on matters of baseball economics, especially in decrying the lack of spending by small-market teams. He pointed as a model to his own investments in the Yankees, which were losing money and were much less popular than the New York Mets when he acquired them, but became one of the richest and most successful franchises in American sports under his leadership.

He died of a massive heart attack at his home in Tampa, FL on July 13, 2010. His wife Joan survived him until 2018. She had held various senior positions in the Yankees hierarchy as well. In 2017, he was placed on the Veterans Committee ballot for the Hall of Fame, open to players and executives from "Today's Game" era, but received fewer than 5 votes. He was on the ballot again in 2019, but again received less than 5 votes.

George M. Steinbrenner High School in Lutz, FL is named in his honor.

I will never have a heart attack. I give them. George Steinbrenner