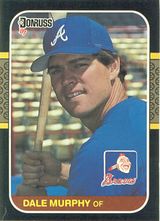 Dale Murphy was arguably the best player in the 1980s, finishing his career with 398 home runs and winning back-to-back MVP Awards. However, his career was relatively short, as he was no longer a productive player by the time the decade ended.

Murphy was a first-round pick in the 1974 amateur draft and made it to the majors at age 20 in 1976 for a cup of coffee as a catcher. In another brief stint in 1977, again as a catcher, he hit .316 with a .526 slugging percentage, and became a regular the following year, which is also the season when Bob Horner, Glenn Hubbard and Larry McWilliams were rookies, giving hope to Braves fans that better days were around the corner. He was switched from catcher that year because of his erratic arm. Although he had a strong arm, he had trouble throwing accurately in base-stealing situations. He was primarily a first baseman in 1978 and 1979 before becoming a centerfielder in 1980.

He spent his first fourteen and one-half years with the Atlanta Braves.

Murphy first became noted as a star in 1980, when he hit 33 home runs at the age of 24. He was fourth in the league in slugging, tenth in OBP, third in runs scored and home runs, and tenth in RBI. He was named to the All-Star team.

After an off year in 1981, he had the four big seasons for which he is famous. In 1982 and 1983 he won the Most Valuable Player Award, and Atlanta won a division title in 1982 while finishing just short in 1983. He was an All-Star and won Gold Gloves both years. He was first in the league in RBI and second in home runs each year. In the next two years, 1984 and 1985, he continued to keep up the pace, leading the league in home runs both yearswhile finishing in the top three in slugging, RBIs and in Adjusted OPS. He again won Gold Gloves and was named to the All-Star team both years.

After an off-year in 1986, the 1987 season was perhaps Murphy's best year. He hit 44 home runs, was second in the league in that category, fifth in RBI, had a career high on-base percentage and made the All-Star team, but he was not in the top ten in the NL MVP voting, with Andre Dawson winning the award despite being with the last-place Chicago Cubs.

If the years from 1982 to 1987 could be considered a career, Dale Murphy would be a shoo-in for the Hall of Fame. However, the remainder of his career was not impressive. In his last six seasons (during four of which he was an everyday player), he only once hit as high as .252, and never slugged higher than .421 with 24 home runs. He finished out his career with parts of three seasons with the Philadelphia Phillies and a brief time with the Colorado Rockies, playing his last game at the end of May, 1993.

In addition to his hitting and fielding, it might be noted that Murphy stole 161 bases in his career, with a high of 30. He also struck out a lot, regularly posting 125-145 strikeouts in a season and usually being in the top three in the league in times struck out.

Dale Murphy was a fan favorite in Atlanta. He was a devout Latter-day Saint, who was well known for his clean-cut habits. He avoided not only illegal drugs but all alcohol and other stimulants. He was also known for his patience and friendliness with fans.

Murphy's son Shawn played football for the Denver Broncos of the NFL. Another son, Jake, played tight end at the University of Utah.

Most back-to-back MVP's are in the Hall of Fame, but Murphy didn't draw a lot of votes in his first year of eligibility 1999 - getting only 19%. The next year was his peak total, with 23%, but he later dropped as low as 8% of the vote and finished at 18.6% in 2013, when time ran out for the BBWAA to vote him in. It appears his fortunes fell as the steroid-using hitters gained prominence, and his fortunes may rise again as hitters have to hit home runs on their own again. He had in fact recovered to 14.5% in 2012, his penultimate year on the ballot. He came to the attention of the Veterans Committee as one of ten candidates from the "Modern Baseball" period (1970-1987) in its 2017 and 2020 votes, but was unsuccessful.

Why has he done so poorly? One might think he would be a strong candidate, with several positives on top of the back-to-back MVP awards: the two home run championships (which came in years other than the MVP years), the five Gold Gloves, the seven All-Star appearances, the Lou Gehrig Memorial Award, the Roberto Clemente Award, and the 398 total lifetime home runs. In addition, he was known as a squeaky-clean player during his career, with not a hint of scandal. During his career, he was a poster boy for the non-drinking, religious life.

Of the 20 players who have won exactly two MVP awards each, 16 are in the Hall of Fame and Miguel Cabrera is not yet eligible. Of the rest, Juan Gonzalez was mentioned in the Mitchell Report ([1]), which leaves only two players - Roger Maris and Dale Murphy. Dale had almost 125 more home runs during his career than Maris, though.

But there are reasons to downgrade his candidacy. First, he played all of his career in hitters' parks. Second, while 398 is enough home runs to get into the Hall of Fame (Tony Perez recently did with fewer), his other numbers seem a bit short: 1,197 runs scored, 1,266 RBI, and 2,111 hits. His batting average, at .265 is not outstanding, and he never appeared in a World Series.

Murphy may yet get into the Hall of Fame, although if it happens, it will require a vote of the Veterans Committee. After the steroid scandals of recent years, his clean image and 398 home runs and MVP awards may look good to future voters. Based on similarity scores, the two most similar players are Joe Carter and Duke Snider. Snider, a player who, like Murphy, played mostly in hitters' parks, is already in the Hall of Fame although he never won an MVP award. On the other hand, Carter, a player who like Murphy had close to 400 home runs, got less than 5% of the vote during his first year of Hall of Fame eligibility. Both Carter and Snider had more prominence in post-season play than Murphy, although one can argue that isn't his fault.

The key may be the number of home runs. Whereas once 400 home runs was considered the magic target, today 500 home runs seems to serve the same purpose. Hall of Fame voters will have to contend with the fact that Murphy hit more home runs than Hall of Famers Perez, Orlando Cepeda, Ralph Kiner, Joe DiMaggio, and Hank Greenberg (as well as Johnny Bench and Carlton Fisk, two catchers). Although those players each had more to offer than just the home runs, so does Murphy.

He was the 1987 Sports Illustrated Co-Sportsman of the Year. He was the first base coach for Team USA in the 2013 World Baseball Classic.