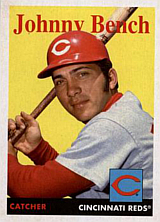 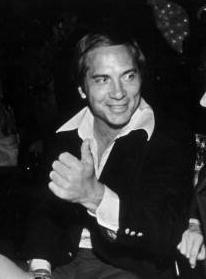 "I can throw out any man alive." - Johnny Bench

"They talk about the Messiah coming back. I'm not sure he hasn't returned already in catcher's clothes." - Sparky Anderson

Johnny Bench, perhaps the best catcher ever, was a two-time MVP, a perennial All-Star, a two-time home run champ, and a key player on the Big Red Machine. He won ten Gold Gloves, beginning in his first full season in the majors. In 2007, he was named to the Rawlings All-Time Gold Glove Team.

He was drafted by the Cincinnati Reds in the 2nd round (36th overall pick) of the 1965 amateur draft. In 1967, he was named the Minor League Player of the Year with the Buffalo Bisons of the AAA International League.

Once unleashed on Major League Baseball, Johnny caught 100+ games for 13 straight years (1968-1980). Starting in 1970, his managers began to play him at other positions as well: first base, third base, right field and left field - as they did not want to completely exhaust him by catching 140+ games a year, yet needed his bat in the lineup full-time. Starting in 1981, he moved off the catcher's spot almost entirely, spending time at first base and third base. He was the Reds' starting third baseman in 1982, but his defense left a lot to be desired and the team finished in last place. He announced his retirement during the 1983 season, effective at the end of the year. To mark the occasion, Commissioner Bowie Kuhn added him and Carl Yastrzemski to the All-Star team, in recognition of the two aging stars' huge contribution to the game over the years.

In the postseason, Johnny shone. He appeared in four World Series, hitting 5 home runs and slugging over .500. Yet, for all his Fall Classic exploits, he is also remembered for being fooled into taking strike three by Rollie Fingers of the Oakland A's in the 1972 World Series after the A's gave the signal for an intentional walk.

Bench was elected to the Baseball Hall of Fame on January 9, 1989 by the Baseball Writers Association of America. His #5 was retired by the Reds in 1984 and he was inducted into the team's Hall of Fame in 1986. In September 2011, the Reds unveiled a statue of Bench at the entrance of the Reds Hall of Fame at Great American Ballpark. He was also inducted to the Peninsula Pro Baseball Hall of Fame, and his number 8 is retired at Peninsula. Bench is also a member of the Carolina League Hall of Fame and was Carolina League Rookie of the Year in 1966. Beginning with the 2000 season, the best collegiate catcher began annually receiving the Johnny Bench Award, although the honor was renamed the "Buster Posey Award" in time for its 20th anniversary, in the name of its most distinguished recipient. For his part, Bench never played college baseball, so it was felt that it was more appropriate to have the honor named after someone who had actually been a prominent college catcher. Bench's first baseball card appearance was in the 1968 Topps set.

Off the diamond, he was the host of the 1980s kids show "The Baseball Bunch", which featured the San Diego Chicken and Tommy Lasorda as "The Dugout Wizard". He also made appearances on network shows including Married... With Children, Mission: Impossible and The Partridge Family. Johnny worked as a Reds broadcaster from 1987 to 1990. 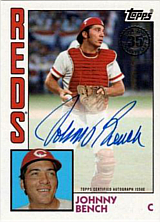