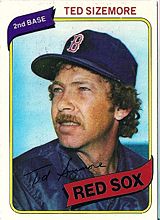 Ted Sizemore had a 12-year career as a second baseman in the major leagues. He was the 1969 NL Rookie of the Year, and played on a couple of division-winning Philadelphia Phillies teams in 1977 and 1978.

He went to Pershing High School in Michigan where he was a star at baseball (playing catcher), football (as a fullback), and basketball (as a guard). Sizemore later went to the University of Michigan at the same time as Geoff Zahn, and was named All-Big Ten as a catcher in 1965 and 1966. He was picked by the Los Angeles Dodgers in the 15th round of the 1966 amateur draft. He hit .330 in Single A ball in 1966, .295 in Double A ball in 1967, and .314 in Triple A ball in 1968, before becoming a regular with the Dodgers in 1969. Monty Basgall worked with Sizemore to convert him from a catcher into a second baseman. With the Dodgers as a rookie second baseman and shortstop, he hit .271 when the league average was .250. The next year he hit .306 in 96 games.

He was traded to the St. Louis Cardinals for controversial slugger Dick Allen. The Dodgers were in need of a big bat, and had other options at second base, including Jim Lefebvre, Billy Grabarkewitz, Bobby Valentine, Lee Lacy, and eventually Davey Lopes. While Sizemore was a decent hitter and a good fielder, he didn't have much power and he didn't steal bases. The Cardinals had 33-year-old Julian Javier at second base and were interested in some younger talent, plus Dick Allen was always a handful.

Sizemore missed the Dodgers' pennant-winning team in 1974. He would be the Cardinals' regular second baseman for five years from 1971 to 1975. They finished second in their division in 1973 and 1974. When Lou Brock broke the single-season stolen base record that last year, he gave credit to Sizemore batting behind him for his ability to bat second.

Sizemore was traded back to the Dodgers in 1976, a year in which they finished second in their division. He got quite a bit of playing time as Davey Lopes did not hit particularly well. He also appeared a couple of times at catcher. The Dodgers traded him to the Phillies and he played on their division-winning teams in 1977 and 1978. While he hit poorly in the regular season in 1978, he hit .385 in the 1978 NLCS. He finished out his career with the Chicago Cubs and Boston Red Sox in 1979 and 1980.

After baseball he joined Rawlings Sporting Goods and became a senior executive.