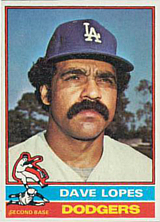 Davey Lopes was the successor to Maury Wills as the top base-stealer on the Los Angeles Dodgers. Lopes was, like Wills, a multi-talented infielder who came up at a late age. He would score well on the Bill James test for baseball smarts, since Lopes' batting average, although decent, was the least of his talents. For a 30 year stretch, 1988 to 2017, he was a major league coach and manager.

Lopes is one of relatively few major leaguers from Rhode Island. He is of Cape Verdean descent (this community, from the Portuguese island possession off West Africa, has pockets in various places in New England).

He became part of the longest-lasting infield of all time, with Steve Garvey, Bill Russell, and Ron Cey. The four played together for approximately ten years. Lopes was primarily the second baseman, although he also played 239 games in the outfield, as well as some games at third base and shortstop. He was a steady hitter who hit between .250 and .285 eleven times. As a lead-off hitter, he drew lots of walks, with a high of 97 in 1979. He had more power than one would expect from a lead-off hitter, with 155 home runs, including a high of 28 in 1979.

He appeared in four World Series with the Dodgers (1974, 1977, 1978 and 1981), generally hitting poorly but getting lots of walks. The exception was the 1978 Series where he hit .308 with 3 home runs. He also holds the dubious distinction of having the lowest batting average for a player selected to the All-Star Game, batting a scant .169 at the time of his selection for the 1981 All-Star Game. His hitting improved in the second half and he managed to raise his average above the Mendoza Line, finishing the season at .206.

After many years with the Dodgers, he spent 2 3/4 seasons with the Oakland Athletics before being traded to the Cubs in their stretch run toward the 1984 pennant. He stayed with the Cubs in 1985 and most of 1986, hitting for a good average, stealing lots of bases, getting copious walks, and hitting for good power. Toward the end of 1986, the Cubs traded him to the Houston Astros for their run for the pennant, and he finished out his playing career at the age of 42 with them in 1987.

Altogether, he played 16 seasons, from age 27 to age 42, and was a four-time All-Star. He won one Gold Glove in 1978. Although no player is truly similar to Lopes, the closest player, based on the similarity scores method, is Jim Fregosi. Other players that score fairly similar are Tommy Harper and Delino DeShields.

From 1988 to 1991, Lopes was a Texas Rangers coach, and for the next three seasons, he was a member of the Baltimore Orioles coaching staff. He was a San Diego Padres coach from 1995 to 1999. In 2000, Lopes became the manager of the Milwaukee Brewers. The club lost 89 games his first year, 94 his next, and he was let go after the 2002 Brewers started off 3-12. He returned to the Padres staff in 2003 and remained there for three years. After spending 2006 as the Washington Nationals first base coach, he joined the Philadelphia Phillies in the same capacity in 2007. In 2011, he was hired to be part of the Dodgers' coaching staff, staying until the end of the 2015 season. In 2016, he moved back to the Washington Nationals as first base coach, staying until the end of the 2017 season.