Note: This page is for 1990s IF/OF Delino DeShields; for his son of the same name who made his debut in 2015, click here 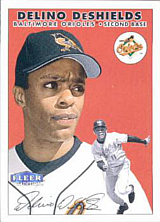 Delino DeShields was considered a budding star early in his major league career. He was a first round pick by the Montreal Expos in the 1987 amateur draft and declined a basketball scholarship to Villanova University to sign with them, with Joe Frisina and Gary Hughes the signing scouts. The Expos were actually prepared to let him play college basketball as well as baseball, but Delino gave up the hoops in order to concentrate on baseball full time, a decision which paid off.

A shortstop in his first three seasons in the minors, he came up with the Expos as their starting second baseman on Opening Day in 1990, having never before played the position at the professional level. He was one of three rookies in the lineup that day, alongside outfielders Larry Walker and Marquis Grissom, who had made their debuts late in the 1989 season. All three went on to very productive big league careers, with Delino finishing second to David Justice in the Rookie of the Year Award vote after the season. He was also named the second baseman on the 1990 Topps All-Star Rookie Team thanks to a .289 batting average, 28 doubles, 69 runs scored and 42 stolen bases. Thereafter, during his major league career of 13 seasons, he was usually among the league leaders in stolen bases (he had 463 total) and was usually his team's regular second baseman until late in his career, when he played a bit in the outfield.

After the 1993 season, the Expos traded him to the Los Angeles Dodgers in return for pitcher Pedro Martinez. At the time, it was considered that the Dodgers had got the best of that deal - even DeShields' manager, Felipe Alou, thought the Expos had given up too much to get the slender and untested Martinez. The deal turned out to be a steal for the Expos when Martinez emerged as one of the best pitchers in baseball, and DeShields slumped in Los Angeles, never hitting higher than .256 in three seasons. But he bounced back to have some more very solid seasons with the St. Louis Cardinals and Baltimore Orioles before finishing his career with the Chicago Cubs.

DeShields led the National League in strikeouts with 151 with the Expos in 1991, not because he was a free swinger but as a result of his extreme patience at the plate: he also drew 95 walks that year, and his career on-base percentage was .352, in spite of a relatively low .268 batting average. Combined with his speed, that made him a very good hitter at the top of the line-up.

His son Delino DeShields Jr. was a first-rounder in the 2010 amateur draft, 23 years after his father, and made his major league debut in 2015. His daughter, Diamond DeShields, has been an All-Star in the WNBA.

DeShields currently holds the record for the most major league at-bats by a player born in Delaware (5,779) and was the all-time hit leader from the state with 1,548 until passed by Paul Goldschmidt in 2021. He was the hitting coach for the Billings Mustangs in 2009 and managed the team in 2010, the first of several minor league managerial assignments for him. In 2019, he became a major league coach for the first time as first base coach of the Cincinnati Reds.

He was nicknamed "Bop" by his teammates. He wore his socks high in tribute to the players of the Negro Leagues at a time when the style was extremely rare.