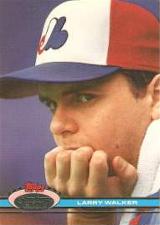 Inducted into Hall of Fame in 2020

"The Expos' Larry Walker, who may have the best arm of any rightfielder in baseball, says he threw out five pitchers at first base on one-hop liners to right when he was in the minors. . . On July 4 (1992) he gunned down Padres shortstop Tony Fernandez. . ." - from a Sports Illustrated article, July 27, 1992, about Walker's first time throwing out a major league position player who was running to first base

"Larry Walker paved the way for guys like me." - Canadian Jason Bay, after being named Rookie of the Year

Larry Walker is the all time leader in games, at bats, hits, doubles, home runs, rbi, runs, stolen bases, and walks by a player born in Canada. He is the only Canadian to reach the following milestones: 2000 hits, 300 home runs, and 1000 rbi.

Walker, born December 1, 1966, was signed by the Montreal Expos as a free agent in 1984. As a youth he had played both hockey - he was a goalkeeper - and baseball growing up in Maple Ridge, British Columbia, and was a close friend of future automobile racer Greg Moore. He spent 1985 through most of 1989 in the minors in the Expos organization, usually hitting around .280 with considerable power. He was very raw when he first joined the organization and only hit .223 with 2 home runs in 62 games on loan to the unaffiliated Utica Blue Sox of the New York-Penn League in 1985, but he blossomed in 1986 with the Burlington Expos of the Midwest League, hitting .289 with 29 home runs, and adding 4 more dingers (and 16 extra base hits) in in 38 games for the West Palm Beach Expos of the Florida State League. After slugging 25 doubles, 7 triples and 26 homers for the AA Jacksonville Expos in 1987, he missed all of 1988 due to an injury (see below).

He made his major league debut at the age of 22 in August of 1989, hitting .170 with no home runs in 56 at-bats. His first call-up came as the Expos were losing their hold on first place in the NL East after having held it since June; they hoped that two young but very talented outfielders, Walker and Marquis Grissom, would provide the spark to push them back over the top, but it wasn't to be. Walker's most memorable performance that first season was in a 22-inning game against the Los Angeles Dodgers - the longest in team history - on August 23rd: in the 16th inning, he was called out on appeal for leaving third base early after scoring the apparent winning run on a sacrifice fly; in the 18th, he made a spectacular catch of a line drive off the bat of Eddie Murray against the wall in right field to keep the scoreless tie going.

The Expos' regular right fielder, Hubie Brooks, became a free agent at the end of the 1989 season and signed with the Dodgers, clearing a spot in the line-up for Walker. In spite of his inauspicious start the previous year, Walker was not sent back to the minors and instead became the regular right fielder for the 1990 Expos, hitting .241 with 19 home runs.

Emerging star with the Expos[edit]

Through the early and middle 1990s, Larry Walker continued to look better and better during most years. He finished in a tie for seventh place in the NL Rookie of the Year Award voting in 1990 after tying the Expos' rookie record held by Andre Dawson with 19 home runs. He also made the 1990 Topps All-Star Rookie Team. In 1992 - still prior to expansion - he hit .300 for the first time and exceeded 20 home runs for the first time. He became the first and only Canadian to win the Expos Player of the Year award in 1992. In the strike-shortened 1994 season, after expansion, he led the league with 44 doubles and hit .322.

He won his first Gold Glove in 1992 and was also named to his first All-Star team that year. He would go on to win seven Gold Gloves and be named to five All-Star teams. His highest finish in the MVP voting while with the low-visibility Expos was fifth in 1992. His statistics during those years now appear deflated in comparison with the high-octane offensive era that followed, and were further depressed by playing in pitcher-friendly Stade Olympique, but he was already one of the National League's greatest offensive forces while with the Expos, and the outfield he formed in 1994 with Grissom and Moises Alou can rank among the great ones in history.

Prime of his career with the Rockies[edit]

After the 1994 season, Walker became a free agent and signed with the Colorado Rockies. Following in the financial wreckage of the 1994 strike, Expos General Manager Kevin Malone was instructed to cut payroll no matter what, and as a result the Expos even declined to offer Walker arbitration, meaning that they received absolutely no compensation when he signed with the Rockies. Although he had been an excellent hitter in Montreal, with the thin air of Denver his statistics began to look much better. He had his first 100-RBI season in 1995, also taking part in postseason play for the first time as the Rockies were the first wild card winners in National League history. In 1997 had his peak OPS+ of 178, good enough to win the MVP award that year. His 49 home runs in 1997 were the most anyone in the National League had hit since Andre Dawson did so for the 1987 Chicago Cubs. That season, he set a major league record with 29 runs scored in April, on his way to scoring a career-high 143 runs; the record stood until 2017, when Bryce Harper scored 32 runs in April.

In his only World Series in 2004, Larry slugged .929 in the Cardinals' losing effort to the Boston Red Sox. Walker batted second in each game, ahead of Albert Pujols. He returned to the Cardinals in 2005 and showed that he could still hit at the age of 38 when he posted a .384 OBP and .502 SLG. Sadly, he retired after the 2005 season, thus missing the Cardinals' win of the 2006 World Series.

As good as he was, Larry Walker would have been even better if he had not struggled with a multitude of injuries. They started even before the majors - Walker missed all of the 1988 season due to an injury suffered while playing winter ball in Hermosillo, Mexico. He needed surgery and a long rehab program for his knee. He spent the year on the Major League team's disabled list, and as a result there was some question when he had a great season in 1990 whether he was still eligible for the Rookie of the Year Award. The Commissioner's office ruled that the year spent on the Major League disabled list should not count as roster time, a ruling that still holds and was immediately applied to teammate Moises Alou in 1992.

In 1994 he suffered a shoulder injury in July, which required him to move to first base as it affected his throwing. The move did not slow down Walker's hitting, but it affected the Expos, as he took the place of promising rookie Cliff Floyd, while being replaced in the outfield by another promising rookie, Rondell White, and by Lou Frazier.

Hall of Famer Larry Doby played in the Negro Leagues in 1942 under the name "Larry Walker" to protect his amateur status.

Through 2009 there have been more than three dozen major league players with the last name Walker. While six of them have been All-Stars, none of them have yet made the Hall of Fame. The most famous Walkers are Fleet Walker, Welday Walker, Dixie Walker, Mysterious Walker and "Harry the Hat" Walker. 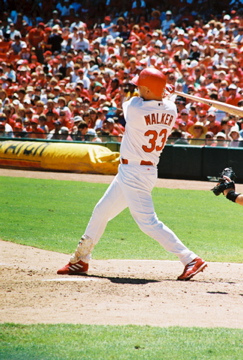 The question of whether Larry Walker would go into the Hall of Fame was an interesting one. Most fans know that gaudy statistics are easy to put up if a player plays in Colorado. Just to give one example, in 1997 in Coors Field the park factor was 123. That's a huge benefit to any hitter.

However, in taking the air out of the statistics, it is important not to lose sight of authentic accomplishments. Objective observers gave him the 1997 MVP award, and named him to the All-Star team five times. They also gave him 7 Gold Gloves. And, perhaps most impressively, his lifetime Adjusted OPS+ in the majors is 140, a number that puts him in a tie at # 75 on the all-time list with Duke Snider, Jesse Burkett, and Babe Herman. He did not in any case become a good hitter in Colorado; he was already outstanding in the much more difficult conditions of Montreal.

However, like Babe Herman, Walker's career numbers are relatively low for someone who played under conditions favorable to hitters. Walker did not reach 500 home runs, but only 383. While some players with 370 to 400 home runs have been elected to the Hall of Fame (such as, most recently, Tony Perez), others have not - such as Frank Howard at 382, Norm Cash at 377, and Gil Hodges at 370. As for RBI, his 1311 lifetime total puts him in a tie with Mickey Vernon, who isn't in the Hall of Fame. He is also below Graig Nettles, Al Oliver, and Ron Santo on the RBI list, all of whom played when fewer runs were being scored.

He has 2160 hits, which is nowhere near the magic number of 3000. Vada Pinson ten years earlier didn't get in with 2757 hits and Oliver never received serious consideration in spite of collecting 2743. Walker's 1355 runs scored tie him with Tommy Leach, who is not in the Hall of Fame.

In the final analysis, the outcome depended on whether the Hall of Fame voters wanted to honor a player who, once you took the air out of the Coors Field statistics, was a truly great player but for a period that wasn't long enough to post the magic numbers of 500 home runs, 1500 RBI, or 3000 hits. In that regard, he was similar to his contemporary Edgar Martinez, who happens to be one of the ten most similar players to Walker (based on the similarity scores method).

In his first year of eligibility for the Hall of Fame, in 2011, he received 20.3% of the vote. In 2012, he moved up slightly, to 22.9%, but fell back to 21.6% in 2013 and to 10.2% in 2014. However, his vote totals picked up again after that trough, and he was back to 21.9% in 2017, as it was clear that voters were uncertain about how to assess his Coors Field numbers properly. However, following some heavy campaigning on his behalf, he made a significant jump in 2018, to 34.1%, although he had little time left to make up the remaining gap now that the eligibility period had been shortened to ten years. He made a huge leap forward in 2019 on the back of a strong media campaign in his favor, reaching 54.6%. With a weak first year class on the horizon for his final year of eligibility - apart from Derek Jeter -, he was now in a good position to make the final push as one of the most compelling candidates on that ballot. A few days before the results of that vote were made public, in January 2020, the Rockies announced that they would retire his uniform number, 33, on April 19th at Coors Field, a date coinciding with the visit of the St. Louis Cardinals. Only Todd Helton had been so honored by the Rockies before him. When the vote tally came in on January 21st, he was elected by a thin margin - 6 votes - but elected nonetheless, his support having continued to expand at a tremendous rate. Vote projections had him right on the bubble and he was convinced he would fall a handful of votes short, until he got the long-awaited call from Cooperstown. There was immediate and strong rejoicing throughout Canada, as he was only the second player from the Great White North, after Ferguson Jenkins, to receive baseball's ultimate honor.

Walker's formal induction into Cooperstown was delayed by the Coronavirus pandemic, as was the retirement ceremony planned by the Rockies for Walker's number. The first was pushed back by a year, until September 8, 2021 and the latter took place on September 25th of that year.