" 'Fleet' never wore a catcher's mitt. . . Walker was a marvelous player, as every old-timer knows. . . Every club Walker played with won the flag with the exception of his second season in Toledo, when the 'locals' were the runners-up. 'Fleet' is the manager of the Cadiz, O., opera house." - from The Sporting Life, August 30, 1913

Fleet Walker is credited as being the first African-American to play in the big leagues. He was the regular catcher for the Toledo Blue Stockings of the American Association in 1884, until rival owners and players demanded that he and his brother, Welday, be removed from the roster. It would be more than six decades before Jackie Robinson would again break the color barrier.

Recent research has suggested that William Edward White may have preceded Walker as the first African-American to play in a big league game, having appeared in one game for Providence in 1879.

He was often referred to as "M. F. Walker" in the press to distinguish him from other ballplayer Walkers such as his brother, who was sometimes called "W. W. Walker".

Fleet Walker was born in a part of Ohio that was heavily Quaker and thus anti-slavery. His town was a stop on the Underground Railroad. His parents were actually both only part black. The family then moved to Steubenville, OH, where Fleet and his brother went to high school. Fleet enjoyed playing baseball in Steubenville. 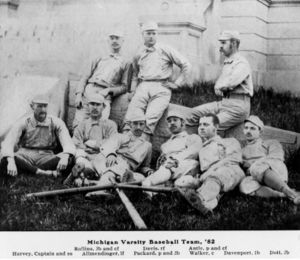 Fleet then went to Oberlin College, where he and Welday became baseball stars. Although Fleet was the first major league player to come from Oberlin, he still remains the one with the most major league at-bats as of 2006. Fleet was invited to play ball at the University of Michigan, and Welday joined up, too. Fleet starred for the team. Fleet also was paid money to play for a local business team. Also in 1882, he played for an amateur team called the Neshannocks, although he was paid to do so.

The book A Fine-Looking Lot of Ball-Tossers: The Remarkable Akrons indicates that Walker caught for the Elyria team in 1880, part of a league in Northern Ohio. Charlie Morton, one of the founders of the Akron team in that league, saw Walker play and when Morton later became the manager of the 1884 Toledo Blue Stockings, Walker became one of his catchers.

In 1884, he was approached by the Toledo Blue Stockings, who at the time played in the Northwest League. Walker helped the team win the pennant, batting .251/4 HR/23 RBI/44 SB and scoring 45 runs in 60 games. In an exhibition game that summer, Cap Anson threatened not to field his Chicago team if Walker were in the lineup, but the manager William Voltz insisted on playing Walker, and Anson gave in.

Accounts of Fleet Walker's play in the majors in 1884 generally say only that he hit .263. That sounds pretty mediocre, until one realizes that he did so on a team that hit only .231, and that the other catcher on the team hit only .185. Fleet's average was actually the third best of the 21 players who appeared for the team in 1884. Looking at the league stats, the league as a whole hit .240, and only one team hit higher than Fleet's .263 average. His OPS+ was 106, very good for a player at his position.

This was accomplished by Fleet in spite of being a catcher, which in those days meant taking a beating from pitched balls. Catchers typically hit much worse than other position players because of the difficulty of playing the position. As an example, the pennant-winning team, the New York Metropolitans, had catcher Bill Holbert, who hit .208 with 0 home runs and 0 triples (Fleet had 3 triples), while the second team in the league, the Columbus Buckeyes, had Rudy Kemmler, who hit .199 with 3 triples.

Walker was 27 at the time, older than any of the other regulars on his team. Deacon McGuire, the other catcher, was only 20, and while Walker made more errors than McGuire, he also had more assists.

By removing Walker from the game, the rival owners and players had not only removed a black man, but also removed a strong competitor.

In one exhibition game against the New York Giants, Fleet greatly impressed John Ward, who wanted to sign him. But Cap Anson and others had sufficient power to stop Ward.

Whenever Fleet's teams played Anson's teams, Fleet had to sit on the bench.

"The Syracuse Stars, champions of the International Association for the season of 1888, returned home from Rochester Saturday night last and were given a royal reception. The team . . . were escorted to carriages amid fireworks, booming of cannon and shouts of thousands of citizens. A line of march was then taken up through the principal streets . . . Over 25,000 were out to see the show . . . a banquet was held (at the Globe Hotel) . . . President O'Neil, of the Syracuse Association, congratulated the boys . . . Catcher Moses Walker, of the Star team, returned thanks to the directors and citizens on behalf of himself and fellow players and everyone was happy." - Sporting Life, October 3, 1888

Walker continued to be in the limelight as he got older. He published a book arguing that blacks should emigrate back to Africa as the best way to beat racism. He killed a burglar in self-defense, was tried for murder and acquitted. He had drinking problems.

He died almost exactly 40 years after he first appeared in the big leagues.

An excellent biography of Walker appears at http://www.jockbio.com/Classic/Walker/Walker_bio.html.