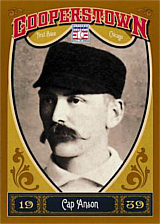 "One July afternoon many years ago some player on the bench happened to mention Pop Anson and his remarkable record. The fact was brought out that the famous old slugger was the only player who had ever made three thousand hits. It seemed a staggering total. I was fairly swamped by it." - Hall of Famer Sam Crawford, writing in Baseball Magazine in 1917, about his goal of 3,000 hits (which he never reached)

Adrian Constantine "Cap" Anson (April 11, 1852, Marshalltown, IA - April 14, 1922, Chicago, IL) was a first baseman and third baseman for the Rockford Forest Citys, Philadelphia Athletics, and Chicago White Stockings. His major league playing career lasted 27 seasons, and he also managed for many years (mostly as a player-manager). One of the first superstars in the game's history, he is likely the first man in history to reach 3,000 hits

Anson spent a year at the University of Notre Dame before he started playing professionally in 1871 in the National Association. His best years in the NA were 1872 and 1873, when he finished in the top 5 in batting, OBP (leading the league in 1872), and OPS both years. He fell off a little after that, but was still good enough that he was sought by Chicago White Stockings Secretary-turned-President William Hulbert as he strove to improve his club for the 1876 season. Hulbert broke league rules by negotiating with Anson and several other stars while the 1875 season was still in progress, ultimately founding the new National League to forestall any disciplinary action. Anson, who had married a Philadelphia, PA native in the meantime, had second thoughts about going west, but Hulbert held Anson to his contract and he eventually warmed to the Windy City. 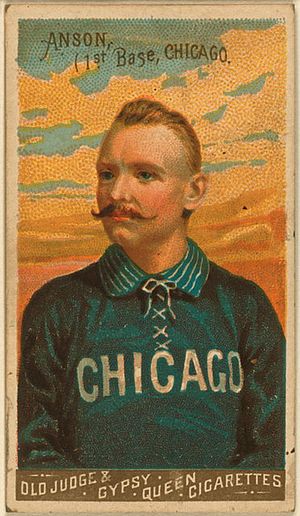 The White Stockings won the first league title, but fell off the pace the following two seasons. During this time, Anson was a solid hitter, but not quite a superstar. Both his fortunes and those of his team would change after Anson was named captain-manager of the club in 1879. With Anson pacing the way, the White Stockings won five pennants between 1880 and 1886. They were helped to the titles using new managerial tactics, including the rotation of two star pitchers. After the expression first became popular, in the 1890s, he retroactively claimed to used some of the first "hit and run" plays, and, especially aided by clever base runner King Kelly in the first half of the 1880s, had his players run the bases in a way that forced the opposition into making errors.

In a modern sense of going South right before a season, he shares credit as an innovator of spring training along with then-Chicago President Al Spalding. An aggressive captain and manager, he regularly helped players play better, and his contributions helped make baseball a higher-quality sport, while at the same time making it more popular with fans. On the field, Anson was the team's best hitter and run producer. In the 1880s, he won two batting titles (1881, 1888) and finished second four times (1880, 1882, 1886-87). During the same period, he led the league in RBI an incredible seven times (1880-82, 1884-86, 1888). His best season was in 1881, when he led the league in batting (.399), OBP (.442), OPS (.952), hits (137), total bases (175), and RBI (82). He also became the first player to hit three consecutive home runs, five homers in two games, and four doubles in a game, as well as being the first to perform two unassisted double plays in a game. He is one of only a few players to score six runs in a game, a feat he accomplished on August 24, 1886.

Unfortunately, Anson was well-known to be a racist. While baseball would have become segregated without him, his regular refusal to play in exhibition games versus dark-skinned players helped usher in segregation. Despite this, Anson remained very popular in Chicago while playing for the White Stockings, which were increasingly known as the Colts starting with an influx of new players in the mid-1880s. Anson signed a ten-year contract in 1888 to manage the White Stockings (which, because of a typographical error he failed to spot, ended after the 1897 season instead of the 1898 one), but his best years were behind him. He led the league in walks in 1890 and garnered his eighth and final RBI crown in 1891, but declined precipitously thereafter. He still became the oldest player to hit a home run in the National League, when he hit his final home run at the age of 46 in 1897. This mark stood until 2005, when it was beaten by 47-year old Julio Franco. On the managerial front, he failed to win another pennant. He also mellowed enough that his nicknames became "Uncle" and "Grandpa." When he was fired as manager after the 1897 season, it also marked the end of his 27-year playing career. The following season, the Colts were called the Orphans to reflect Anson's departure.

There is much controversy as to whether he became the first player ever to make 3,000 hits in a major league career. For many years, recognized statistics credited him with precisely that total. Researchers in the 1990s argued that he was incorrectly credited with extra hits in 1887, when bases on balls were counted as hits. Eliminating the 60 walks Anson received that year would drop his hit total to 2,995 according to statistics officially recognized by Major League Baseball. However, if one counts his 423 earlier hits in the NA, the major leagues' predecessor (which Major League Baseball does not), he is well over the mark. He was, by any standard, the first player to make 3,000 hits in his professional career.

Anson briefly made a return to baseball managing the New York Giants in June and July of 1898, but fully retired afterward. He was later named president of a new American Association, but he scuttled the venture at the first sign of trouble, leaving him a laughingstock. He was later elected city clerk of Chicago in 1905, and failed in the Democratic primary to become sheriff in 1907. He opened a lavish billiard club and bowling alley in Chicago in 1899, billed at the time as having "the largest and best equipped billiard and pool rooms in the world", but the venture went bankrupt in 1908. He proceeded to mortgage his home to finance a semi-pro team in 1909, but that enterprise went bust within a year, leaving him with his house foreclosed and no obvious means of supporting himself. He then decided to try his hand in vaudeville, something which a lot of baseball players did at the time. He was not a particularly talented actor, but he could recite a decent monologue (and George M. Cohan and Ring Lardner wrote texts for him), keeping the crowd's attention. In later years, he had even greater success with an act with two of his daughters, Adele and Dorothy, who performed most of the singing and dancing, while at the show's climax, Anson would stand on stage in his old Cub uniform, swinging a silver bat and hitting papier-mâché balls lobbed at him by spectators. As unlikely as this sounds, this was a big success and he toured the United States in various reviews, putting him back in a correct financial position. As late as 1920, he had delusions of becoming commissioner of baseball. He settled for general manager of a golf club in Chicago in April 1922, dying that month of a glandular ailment at the age of 69. He was interred in the Oak Woods Cemetery of Chicago.

Anson was inducted into the Hall of Fame in 1939, one of the first 19th Century players selected. Over 100 years after his retirement, he still holds several Cubs franchise records, including most career hits and runs. In addition, the White Sox owe their name to the team he made famous, the White Stockings of the 19th Century and Anson, in part motivated by his dislike for the current management of the Chicago National League club, played an unorthodox role in helping Charles Comiskey place the White Sox in Chicago for the 1900 season.

In 1992, Anson was one of the ringers originally chosen by C. Montgomery Burns for his softball team to lead the Springfield Power Plant to glory in The Simpsons episode "Homer At The Bat". Unfortunately for Burns, all of his handpicked ringers were long deceased.

Some or all content from this article is licensed under the GNU Free Documentation License. It uses material from the Wikipedia article "Cap Anson".