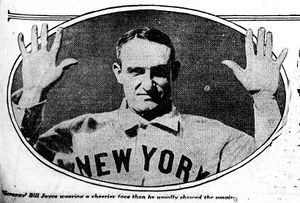 A major league third baseman for eight seasons in the 1890s, Bill Joyce was known for his high on-base percentages and his large number of home runs. He is # 7 on the all-time list for on-base percentage. He is also one of only two players who has hit four triples in a single game (George Strief is the other).

He was half responsible for the term "Texas Leaguer". He made his contribution to the baseball lexicon in 1889, while still in the minor leagues. When he and outfielder Art Sunday, both recently transferred from Houston of the Texas League, opened their first game for the International League Toledo club with back-to-back bloop hits, teammates jeered at the alleged source of cheap hits.

He ran a tavern in downtown St. Louis, MO before buying a minor league team, then went to work for St. Louis City.

He died at age 75 and is buried at Bellefontaine Cemetery in St. Louis.

A player named Joyce played one game for Washington in 1886. There has been some speculation about whether this was Bill or someone related to him.