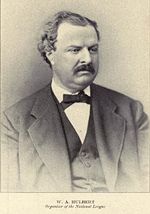 Inducted into Hall of Fame in 1995

William Hulbert was one of the founders of the National League and its President from 1877 until his death in 1882. He was also President of the Chicago White Stockings (who later became the Chicago Cubs). Also a well-known Chicago businessman, Hulbert died of heart disease at age 49.

Hulbert grew frustrated with the limitations of the National Association, particularly its inability to force clubs to play all of their scheduled games or to keep players bound to one team, in addition to the general rowdiness around the league. He drew up plans for a different type of organization, with a stronger central authority, and which would attract a better type of fan by banning beer sales and Sunday baseball, and cracking down on gambling. Because western cities had been losers under the National Association set-up, as eastern clubs often declined to make road trips west, he gathered an early core of supporters from three western cities (Cincinnati, Louisville and St. Louis), in addition to Harry Wright of the Boston Red Stockings, who was also convinced a new business model was needed. At the National League's founding meeting in 1876, Hulbert convinced representatives from the New York Mutuals and Philadelphia Athletics to go along with his plan because his scheme promised their teams a monopoly over top-level baseball in their respective cities. However, he declined to take the title of league president, leaving the honor to Morgan Bulkeley, a prominent businessman and aspiring politician who also was a part owner of the Hartford Dark Blues, the new league's eighth franchise.

Bulkeley resigned after a year, however, to concentrate on his political ventures (he would eventually be elected Mayor of Hartford, Governor of Connecticut and a United States Senator) and Hulbert was the logical choice to take over, as everyone knew he was the real power behind the throne. He had to deal with the issue of both New York and Philadelphia, in true National Association fashion, having failed to complete their schedule by forgoing their final road trip of the 1876 season. He was unbending in applying the league's rules and had them kicked out, leaving the circuit with six teams in 1877. After that season, he cracked the whip again, issuing a lifetime ban against four members of the Louisville Grays who had been involved in a gambling scandal. That also led to the demise of the Louisville franchise, whose owners quit in disgust over their players' crooked behavior; the St. Louis Maroons also left the league, because they had signed two of the banned players and did not want to play the following season without them. However, he managed to attract the Indianapolis Blues, Milwaukee Grays and Providence Grays to join the league in 1878, keeping the circuit alive with six teams (Hartford had also quit after playing its second season in Brooklyn instead of its home city).

There was more trouble after the 1880 season, when the struggling Cincinnati Reds franchise flaunted league rules by leasing its ballpark to other teams on Sundays to add revenue, and threatened to break the ban on selling beer as well. That was too much for Hulbert, and he had the franchise expelled from the league, which led to the formation shortly thereafter of the American Association, which had no qualms about selling alcohol, breaking the sabbath or allowing rowdy play. However, by then the National League was back to eight franchises and on a solid footing. When Hulbert passed away, he left a strong organization that would withstand the test of time. His vision of how a professional sports league should operate became a model for all future North American sports leagues.

Ironically, when the Hall of Fame was founded a half century after Hulbert's death, it was Bulkeley who was inducted alongside American League founder Ban Johnson. Bulkeley's later prominence had obscured the fact that his role in the creation of the National League had been quite passive, and it took until 1995 for the true founder of the "senior circuit" to receive due recognition in Cooperstown.

"It always has been the contention of the author that the role of this strong man of the Middle West in baseball has been grossly underplayed. ..." Fred Lieb, in his book The Baseball Story.