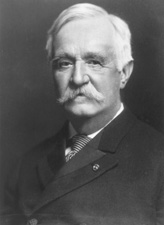 Morgan Bulkeley was the president of the Hartford Dark Blues in 1874 and 1875 and was selected as figurehead president of the National League when it was founded in 1876. He resigned at the end of the season in favor of the true founder William Hulbert.

Bulkeley was elected to the Baseball Hall of Fame on December 7, 1937 by the Centennial Commission, likely as the National League pendant for Ban Johnson, the first president of the American League, who was a deserving inductee. In Bulkeley's case, however, most baseball historians question his selection, arguing that he had minimal significance in baseball history in spite of his briefly-held title. He did serve on the Mills Commission about the origins of baseball in 1905, but that Commission came up with the ludicrous finding that Abner Doubleday had invented baseball at Cooperstown, NY in the 1830s; being part of that fiasco does not boost Bulkeley's case for the Hall of Fame at all.

Away from the diamond, Bulkeley served in the 13th New York Volunteers regiment during the Civil War then was the head of the Aetna Life Insurance company, which his father had founded, for many years. He was also mayor of Hartford, Connecticut from 1880 to 1888, governor of Connecticut from 1889 to 1893, and a U.S. Senator for one term from 1905 to 1911. A major bridge crossing the Connecticut River in Hartford is named in his honor, as well as a high school.