"Mike's only enemy was himself." - Cap Anson

King Kelly was a legendary 19th Century ballplayer who played all nine positions and had an Adjusted OPS of 138. He led the league in batting twice.

Kelly did most of his catching toward the end of his career. For the first part of his career he was primarily an outfielder, although in one season (1879) he was chiefly a third baseman while in another (1882) he was mostly a shortstop. In 1887 he played 30 games at second base. As a pitcher he had a 4.14 ERA in 45.7 innings spread out over 7 years.

The most similar player, based on the similarity scores method, was Buck Ewing, which makes sense since Ewing was also a catcher and player-manager.

Kelly broke in at age 20 as an above-average player with the 1878 Cincinnati Reds and became a star in 1879 when he hit .348. He spent much of the 1880s (1880-1886) playing in Chicago alongside Cap Anson. For most of the rest of his career he played in Boston, appearing for all its teams in three leagues - the National League, the Players League, and the American Association.

He worked a total of 7 games as an umpire, starting in the National League in 1881 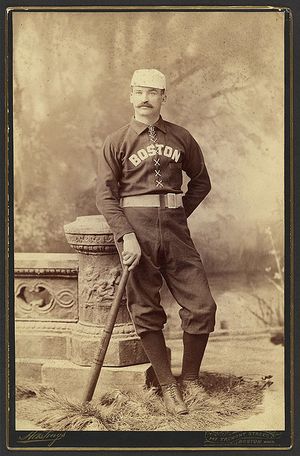 He stole more than 368 bases in his career (stats are not available for the early part of his career), causing fans to call out "Slide, Kelly, Slide".

Kelly was a flamboyant personality and dressed very snappy. He appeared during the off-seasons on stage, which added to his fame. His obituary referred to him as having "uncertain habits".

"His convenient way of forgetting that there is a third bag in the circuit has astonished many base ball enthusiasts. . . John Morrill broke into a laugh and said: -- 'Kelly gets caught sometimes. We were playing in Chicago one day when he tried to cut off third. I did not see him although I was covering first, but I happened to look at Billy Hawes, who was umpiring, and he was pointing at Kelly and laughing as hard as he could. That was the first I knew that anything was wrong. Billy Hawes was too smart for him, and he was so amused to think that he had caught Kelly in one of his tricks, that all he could do was to dance up down and to poke fun at him.' " - Sporting Life of Feb. 3, 1886, in which George Wright and John Morrill swapped stories about Mike Kelly

After his major league days, he managed in the minors and opened a bar. Kelly died young, in 1894 only a year after he left the majors.