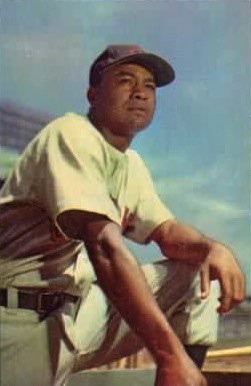 In 1942, Doby played for the Newark Eagles, under the pseudonym of "Larry Walker" to protect his amateur status and played his first pro game at Yankee Stadium. In 1943, he played for the Paterson (NJ) Panthers, becoming the first African American to play in the American Basketball League, a fore-runner to the NBA. During World War II, he missed two seasons (1944 and 1945) while serving in the United States Navy.

Doby was signed by the Cleveland Indians in 1947. He started the American League on the road to integration when he became the first black player to appear in an AL game on July 5, 1947, less than three months after Jackie Robinson had broken the color barrier in the National League. He did not have much success that first year, but became the club's regular centerfielder in 1948 when the Indians won the World Series. He slugged 32 home runs in 1952, becoming the first black player to lead either major league in homers. In 1953, he broke an American League record held by Gus Williams since 1914 when he struck out 121 times. He hit 32 home runs again and drove in 126 runs for the great 1954 Indians team that won 111 games. He was second in the MVP voting that year.

On July 30, 1954, he made what is regarded as one of the greatest catches in Indians history. Playing the Washington Senators, he robbed Tom Umphlett of an apparent game-tying home run by leaping above the fence at Cleveland Municipal Stadium near the 380-foot mark and backhanding the ball with the top of his glove, his torso entirely above the fence. He then came down on the awning above the bullpen located behind the fence, bounced off it and fell back onto the playing field still holding the ball. Left fielder Al Smith raced over and retrieved the ball from the knocked-out Doby's mitt to keep the baserunner from advancing.

Doby was consistently undervalued in MVP voting. Although he was in the top ten in OPS+ each year from 1948-1953 as well as in 1955 and 1957, he only twice finished in the top ten in MVP voting. He led the league in OPS+ in 1950 and 1952, but in spite of showing overall offensive value finished only #8 and #12 those years in the MVP voting. He did finish as high as #2 in the MVP voting in 1954, but that was a year when (as a star on the pennant-winning 1954 Indians) he led the league in both homers and RBI. Most years, when a pennant-winning player leads the league in both HR and RBI, he would be seen as a sure thing to win the MVP. Was his poor showing in MVP voting a result of racism? Possibly.

After retiring from the major leagues, Doby played for the Chunichi Dragons in Japan in 1962, where he became the first major league Hall of Famer to play in both the NPB and Major League Baseball.

Doby later went on to serve as a coach for the Montreal Expos from 1971 to 1973 and a member of the Cleveland Indians staff in 1974. He returned to the Expos in 1976 and was a Chicago White Sox coach in 1977 and 1978. He also managed the Sox in the second half of the 1978 campaign - the second African-American manager after Frank Robinson. His son Larry Doby Jr. played in the minors.

It took some time for Larry Doby to be recognized as a pioneer of integration whose importance is close to that of the great Jackie Robinson. In spite of his impeccable numbers and character, he had to wait until 1998 to be inducted in the Hall of Fame by the Veterans Committee. However, he received more frequent honors from that point onward. Chief among these was having the Most Valuable Player Award for the annual Futures Game named the "Larry Doby Award" in his honor. On July 20, 2012, the United States Postal Service issued a commemorative stamp with his likeness as part of a series of four stamps honoring Hall of Famers.

The similarity scores method shows a strange group as the most similar players to Doby. None of them has as high an OPS+ as Doby, and some of them had careers that were far less impressive. Perhaps the most similar player on the list to Doby is Dolph Camilli, who posted a batting average, OBP, SLG and OPS+ that are quite similar to Doby. However, Camilli played most of his career in the 1930s when batting averages were higher than in Doby's time, and Camilli played a less important defensive position (first base compared to center field for Doby), so it's easy to conclude that Doby was a more prominent player in his time. Interestingly, when the two players had a year on a pennant-winner when they led the league in HR and RBI (Camilli in 1941 and Doby in 1954), Camilli won the MVP Award while Doby finished second.