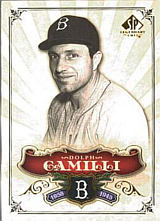 "Charlie Grimm was managing the Cubs at the time of the first [Camilli] trade. His general manager was Bill Walker; Warren Brown once wrote that the Cardinal pitcher, Bill Walker, 'is not to be confused with the Cubs' general manager, who is confused enough as it is.' Anyway, Walker traded Camilli to the Phillies without asking Grimm or even telling him about it. A newsman called Grimm and asked him if it was true that the Cubs had traded Camilli. Grimm bought some time and called Bill Walker. 'I finally got in touch with his chauffeur,' wrote Grimm, 'who told me that the deal had indeed been made. I was furious that I hadn't been consulted, and every time in the next several years when Camilli smashed a homer for the Phillies or Dodgers, I muttered to myself that Bill Walker should have stayed in the fish business.'" - from the Bill James Historical Baseball Abstract

Camilli was in the minors for eight years before coming to the majors, appearing mostly for the Sacramento Senators.

Dolph was originally signed by the Chicago Cubs and came up with them in 1933, but established himself as a big league regular with the Philadelphia Phillies starting in 1934. Camilli opened 1935 with 12 RBI in the first three games; it would be 78 years until a player (Chris Davis) topped that. He was traded from the Phillies to the Brooklyn Dodgers in 1938 and made his first All-Star appearance the next year, appearing as a pinch-hitter in the 1939 All-Star Game at Yankee Stadium. In 1941, he led the National League with 34 home runs and 120 RBI and was named the league's Most Valuable Player as the Dodgers won the pennant with exactly 100 victories.

He was traded across town to the New York Giants in July 1943, but he refused to go, instead quitting baseball and returning to work on his California cattle ranch. The Giants traded his rights to the Oakland Oaks in December for Bill Rigney, and the next season he returned as player/manager with Oakland, who played their home games about 100 miles from his Laytonville, CA ranch. Camilli played 113 games for the Oaks, hitting .289 with 14 home runs, and as skipper led them to a tie for third place. He returned to the Oaks in 1945 and even started one game as a pitcher, going five innings. He played sparingly that season (only 14 at-bats in about 80 games) and was fired in June. Afterwards, he signed with the Boston Red Sox and hit .212 with them in what would be his last big league season.

Dolph slugged 239 home runs in his career, enjoying eight consecutive seasons of 20 or more home runs, with his league leading 34 in 1941 his personal best. He had five seasons of 100 or more RBI and four seasons of 100 or more walks, leading the NL in 1938 (119) and 1939 (110). For his career, he scored 930 times, drove in 950 runs, walked 947 times and struck out 961, a highly unusual closely knit cluster of those four statistics. His career slash line was an impressive .277/.388/.492, making for a lifetime Adjusted OPS+ of an impressive 136. According to the similarity scores method, the most similar player to Camilli is Hall of Famer Larry Doby.

Camilli's top salary with the Dodgers was $22,000 (plus housing and transportation for his family). As player/manager with the Oaks in 1944, he was paid $12,000. Baseball Magazine once had a feature story on him entitled "That Family Man Camilli". He was married with 7 children (including future big leaguer Doug Camilli) and 34 years old when World War II started, thus not called up for service. His brother, Frankie Campbell, was a heavyweight boxer who died as a result of being knocked out by champion Max Baer. Dolph was also grandfather of Kevin Camilli. Gil Hodges played with both Dolph and Doug Camilli.