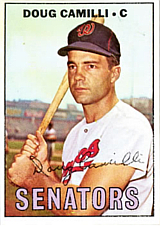 The son of Dolph Camilli and father of Kevin Camilli, Doug Camilli had a nine-year career in the majors with the Los Angeles Dodgers and the Washington Senators. He was a backup catcher who caught one of Sandy Koufax's no-hitters.

Out of Stanford, Doug was signed by the Dodgers in 1957 and came up at 23, the same age as Don Drysdale and Frank Howard. He appeared in some games with the Dodgers each year from 1960 to 1964. The number of at bats given to him increased annually to a peak of 123 in 1964. In by far his best season, he hit .284/.366/.523 in 88 at bats in 1962. He did not appear in the 1963 World Series with the Dodgers although he was on the roster, earning a ring. After the 1964 season, the Senators purchased him and he spent the rest of his major league career in D.C. He had his highest number of at-bats in 1965, batting .192 in 75 games (193 at bats) and the number decreased each year after that. The most similar player to Camilli, using similarity scores, is contemporary catcher Bob Uecker, although Doug was not known for his biting wit and hilarious anecdotes. Gil Hodges played with both Dolph and Doug.

Doug was a Senators coach in 1968 and 1969, making one final appearance as a player at the end of that second season, and was a member of the Boston Red Sox staff from 1970 to 1973. He was later the pitching coach of the Winter Haven Red Soxfrom 1981-1984. He then managed for four years, returning to Winter Haven as pitching coach from 1989-1990.

There is a columnist for the Montreal Gazette who uses a pen name of Doug Camilli, which he took from this Doug Camilli.