Bob Uecker was a catcher who later became better known as an actor and broadcaster.

He was born Robert George Uecker in Milwaukee, WI on January 26, 1934 (when he was playing, he was listed as born in 1935, but like many others, that was because he had shaved a year off his age). Uecker played in the minors for seven seasons, showing good power with a slugging percentage of .475.

He made his major league debut in 1962 as a catcher with the Milwaukee Braves. In a career that lasted 6 seasons, Uecker compiled a batting average of .200 with 14 home runs and 74 RBIs in 297 games.

Uecker was never his club's primary catcher at the major league level. The closest he came was on the 1966 Philadelphia Phillies, where he had 237 at-bats backing up Clay Dalrymple who had 404 at-bats. Among the other catchers he backed up in the majors were Joe Torre and Tim McCarver. Other teammates included Warren Spahn, Bob Gibson, Hank Aaron, Jim Bunning, Eddie Mathews and Dick Allen.

After his playing career ended in 1967 (with the Atlanta Braves), he worked for the Braves in their media department before becoming a broadcaster with his hometown Milwaukee Brewers in 1970. He has been the "Voice of the Brewers" since the early 1980s as well as doing games for ABC's Monday Night Baseball and (later) NBC's playoff coverage.

Outside of his playing and broadcasting career, Uecker is known as "Mr. Baseball", someone who is quick to make fun of his own career to get laughs. For example, Uecker hit a grand slam home run on June 21, 1967 [1] off pitcher Ron Herbel of the San Francisco Giants. Uecker's standard joke is that after he hit his grand slam, the manager of the Giants came out to the mound to take Herbel out and with him was Herbel's suitcase.

Bob also became well known for doing commercials in the 1970s and for his line "I must be in the front row!", which led to him actually being moved to the highest part in the stadium. Currently, the Brewers have obstructed view seats at Miller Park called "Uecker seats" to honor Uecker. 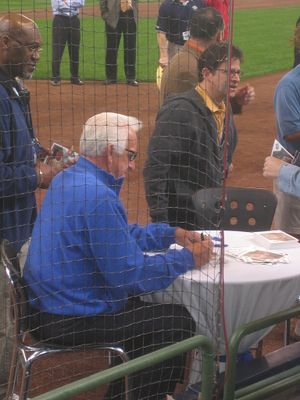 Uecker signs autographs for the fans.

Bob starred as George Owens in the television series Mr. Belvedere from 1985 to 1990, appearing in 117 episodes. He has also been in the movies Major League, Fatal Instinct and Homeward Bound II among other roles, as well as appearing as himself numerous times on shows such as David Letterman's, Jay Leno's and Johnny Carson's late night shows, on Saturday Night Live and on The New Hollywood Squares.

Uecker received the Ford Frick Award from the Hall of Fame in 2003. Upon his induction he deadpaned to the audience "I should have gone in as a player." He underwent open-heart surgery in 1991, but recovered quickly and was back on the job within five weeks. He underwent surgery again for a similar problem on April 30, 2010. This time, he needed to step away from the broadcast booth for three months.

In 2012, the Milwaukee Brewers announced that they would be putting up Uecker's statue outside Miller Park, and that it would be dedicated on August 31st. Asked why it took so long for this to happen, Uecker replied in his usual deadpan way: "I didn't have enough for the down payment." On June 15, 2015, he was hit in the head by a batted ball during batting practice and had to be hospitalized overnight with a concussion when he complained of dizziness after working the first six innings of that night's broadcast. He was in the middle of clubhouse celebrations both times when the Brewers clinched a division title by winning a one-game playoff against the Chicago Cubs on October 1, 2018, and then swept the Division Series against the Colorado Rockies. He was then invited to throw the ceremonial first pitch before Game 1 of the NLCS, against the Los Angeles Dodgers on October 12th.

On September 25, 2021, the Brewers celebrated "Bob Uecker Day" to mark his 50th year as a broadcaster. Mayor Tom Barrett of Milwaukee joined in the celebrations by proclaiming the day city-wide, but otherwise, it was a typical Uecker affair. As Hall of Famer Robin Yount put it: "Bob and I were similar hitters. With the only difference being about 100 points in our career batting average." He delivered the ceremonial first pitch in that day's game, albeit with the aid of a pitching machine, a concession to his 87 years,