Home of the Milwaukee Brewers, 2001 to present

NICKNAMES: Brewers Stadium, "The Fan", "Petak's Petard" (after former State Senator George Petak, who cast the deciding vote for the ballpark, and lost a recall election over that vote), "The Keg"

American Family Park, known as Miller Park for its first two decades, is a convertible roof ballpark that had a stormy beginning, with politics being played just to get it constructed. A major accident in July of 1999 involving a crane attempting to make a lift of a roof panel caused the deaths of three iron workers and set back the opening of the park by a full year.

The park has several features, besides its seven-panel fan-shaped roof:

Richie Sexson dented the Pepsi sign on that scoreboard a few times during the inaugural season, and Jeromy Burnitz hit four homers against the hated Chicago Cubs that year as well (including one that actually bounced out of the stadium). 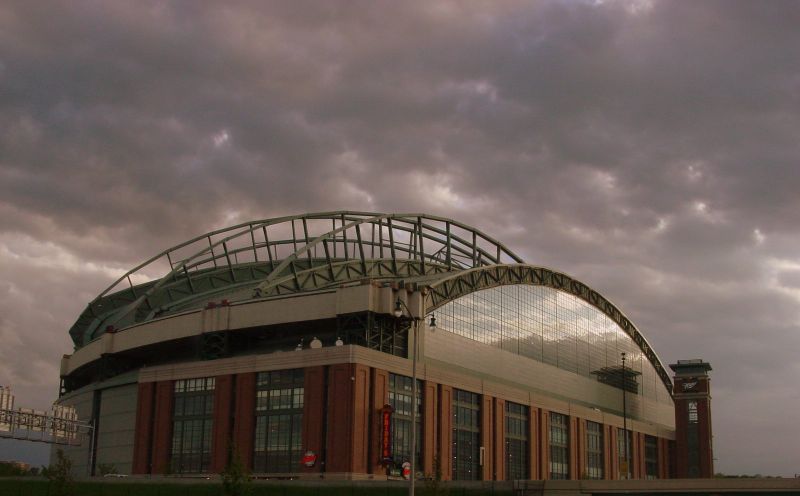 The 2002 All-Star Game played here will not soon be forgotten – "There's no tying in baseball!" – but, unfortunately, the fiasco gave most observers in the media very negative impressions of the park. The roof was the source of some criticism, especially during the Home Run Derby, since it appeared to "leak" at the seams (the process of opening and closing the roof causes water standing on the panels to spill down onto the field). Of course, the Derby continued on without as much as a hitch because of the roof (though it cost Sammy Sosa some home runs). Shawn Green of the visiting Los Angeles Dodgers hit four home runs while going 6-for-6 with seven runs on May 23, 2002.

Early in the 2002 season, there were some concerns over the loud noise level near the pivot and some "design flaws" in the moving mechanisms. After an inspection by a group of engineers, it was determined that the bearings of the roof were wearing out prematurely. The Brewers made repairs on those bearings during the winter of 2002-2003 – and a year later further examination determined that the bogies that open and close the panels were also failing prematurely. That's what you get for having a unique design. The bogies were scheduled for a complete overhaul in 2006.

On the plus side, the cost of repairs didn't cost taxpayers a thing, since the lawsuit between Mitsubishi, Travelers Insurance and the Stadium Board was settled in early January, 2005 – right before it was scheduled to go to trial. Mitsubishi essentially washed its hands of the whole thing, saying that the roof is (and will remain) "unique" in stature. (Translation: "we're never going to build one like THAT again.")

Miller Park was turned into a movie set in the summer of 2003, as the site for the filming of Bernie Mac's baseball comedy, Mr. 3000. In the movie, slugger Stan Ross tries to make a comeback when it's discovered that he is four hits shy of 3,000 career hits. 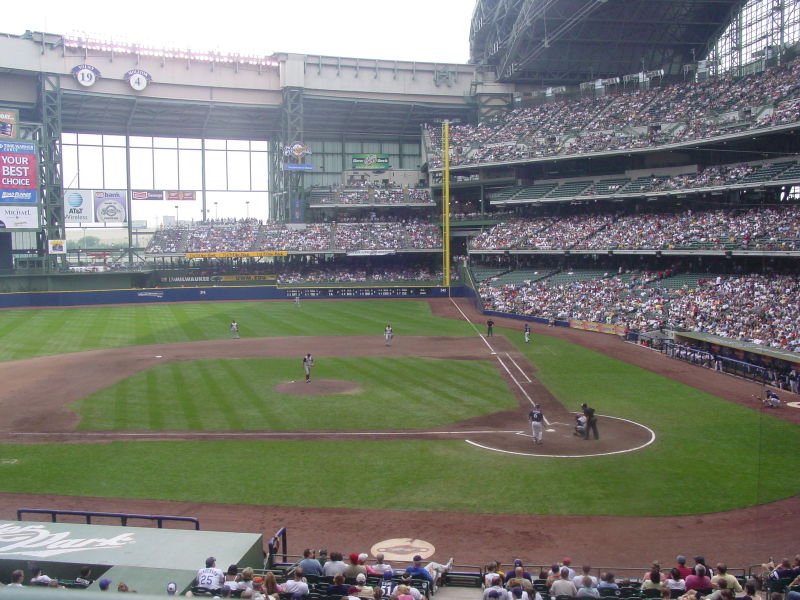 It did not help attendance in the park that the team set futility records in its first seasons playing here – the 2002 squad was the first Brewer team in franchise history to lose 100 games. However, attendance picked up as the Brewers' on-field performance improved.

The most infamous moment in the Park's early history, however (other than the All-Star fiasco) was when then-Pirate Randall Simon bopped the Italian Sausage on the head with a bat during the famous sausage race on Turn Back the Clock Night in 2003.

The team was sold in late 2004 to a group led by Mark Attanasio, after a messy divorce by one-year team president Ulice Payne. The House That Bud Built came under new management, and in 2004 the park saw its first increase in attendance since its opening.

Backup catcher Chad Moeller became the first Brewer to hit for the cycle at home in May 2004, and the Brewers finally fielded a winning team in 2007, after posting a .500 record in 2005. In 2008, Miller Park was used as a neutral site to stage a series between the Chicago Cubs and Houston Astros that had to be moved because of Hurricane Ike in Houston, TX. While the Astros were nominally, the home team, the crowd was made up entirely of Cubs fans and on September 14th, Carlos Zambrano pitched the first neutral site no-hitter in major league history, a 5-0 win. The park had earlier been used as a neutral site from April 10-12, 2007 when the Cleveland Indians were snowed out of a home series against the Los Angeles Angels of Anaheim.

In 2018, the team adopted a plan to keep rival Chicago Cubs fans from overwhelming the ballpark when the Cubs are the visitors, a common occurrence given the short distance between the two cities, and the fact that Wrigley Field seats are such a hot ticket. As a result many home games against the Cubs were played in an atmosphere in which visiting fans seem to outnumber the Brewer faithful. The Brewers announced that advance sales of tickets for theses games would be restricted to Wisconsin residents. The plan had limited success - there are lots of Cubs fans living in Wisconsin, to begin with, and there is nothing preventing others from acquiring tickets on the re-sale market, but it was re-instated for 2019. On August 27th of that year, there was a rare rain delay at the park during a game against the St. Louis Cardinals, as a sudden rainstorm began pouring in so quickly that the roof could not be closed in time. It took 9 minutes to close the roof, and then some more time to get the pitcher's mound back into playing shape.

In January 2019, the Brewers announced that the ballpark would be getting a new name in 2021, as the Family Insurance Company, a long-time sponsor of the team based in Madison, WI, had made a very generous offer to take over the naming rights after the end of the Miller contract. The brewing company immediately stated that it would remain intimately associated with the team in spite of the change. The ballpark will be known as American Family Field at that point.