Turn Back the Clock Night 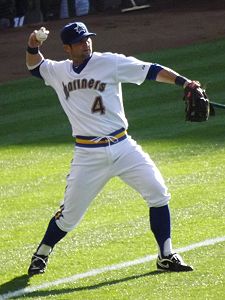 Adam Kennedy warming up before Turn Back The Clock Night (July 1, 2011)

Turn Back the Clock Night is a promotion used in Major League Baseball. Teams compete in uniforms from their past, often in championship season attire. This promotion has been adopted throughout the league, sometimes even seeing only one team wearing past uniforms on certain days of the schedule. Most often the uniforms are vintage uniforms for the same teams, but they are sometimes uniforms of minor league predecessors of the Major League teams, uniforms from prior locations of the current franchise, Negro League clubs from the area or other historical local teams.

The first Turn Back the Clock Night occurred in 1990 at old Comiskey Park. To celebrate the closing of the stadium, the White Sox donned 1917 uniforms from the last time the Sox had won the World Series; the visiting Milwaukee Brewers wore their normal road uniforms. The electronic scoreboards were shut off and a special hand-operated scoreboard was built. The public address system also wasn't used and the ushers - who also wore period costumes along with the grounds crew - announced the starting line-ups with megaphones. Also silent was the stadium organ. General admission tickets were 50¢, other tickets were half price and popcorn was 5¢.

The Baltimore Orioles followed suit a year later, offering 75¢ bleacher seats and 25¢ popcorn, matching the prices of 1966. The Chicago Cubs were the next to salute the past, wearing throwback uniforms in 1992. Since then, Turn Back the Clock games have become a frequent promotion across the league, with a handful of teams making it a yearly tradition.

When the Seattle Mariners wore their old teal colored Sunday home jerseys (originally used from 1994 to 1996) to honor their 1995 season during such a promotion in 2010, the response was so positive that the teal jerseys were brought back as a regular alternate jersey the following season. The jersey was originally retired at the behest of Ken Griffey Jr. who thought they were bad luck and that the team never won while wearing them. The M's got trounced 11-2 by the Los Angeles Angels of Anaheim on this Turn Back the Clock promotion and were again trashed 12-3 the next time they wore the teal jerseys during their 2011 home opener against Cleveland.

The Milwaukee Brewers regularly wear throwback uniforms from the early 1990s throughout the season. The Toronto Blue Jays also wore their original powder blue road uniforms at some home games for a couple years until 2012, when they modified their uniform design to more resemble their past uniforms.

Turn Ahead the Clock Night[edit]

A spin-off -- Turn Ahead the Clock Night -- was first done by the Seattle Mariners in 1998. Seen as popular and innovative and deemed a success, Major League Baseball planned 14 such promotions for the following year with all but eight teams willing to participate. This string of games was not nearly as well received as the original, with national sports media figures mocking its hideous uniforms and general silliness. Turn Ahead the Clock Night fizzled quickly and is now heavily ridiculed.

Dates of Turn Back the Clock Promotions[edit]

This list is incomplete, as it's hard to document every instance of this promotion.