PNC Park has been the home of the Pittsburgh Pirates since 2001. It is located in Pittsburgh, PA.

The ownership of the Pirates had been demanding a new park, saying they may leave the city otherwise, even though Three Rivers Stadium was in good condition. An initiative was put on the ballot, proposing a sales tax to fund a new stadium as well as work on the convention center and other civic structures and organizations. The ballot was voted down by large percentages in Allegheny County and the surrounding 10 counties, despite the fervent efforts of the initiative to claim it wasn't a "stadium tax." When the public refused en masse to fund a new stadium, Pittsburgh mayor Tom Murphy helped push through a bill for stadium funding in the state legislature at 4 in the morning, when many legislators were not present. This deceptive back-door method of stadium welfare helped fund PNC Park. 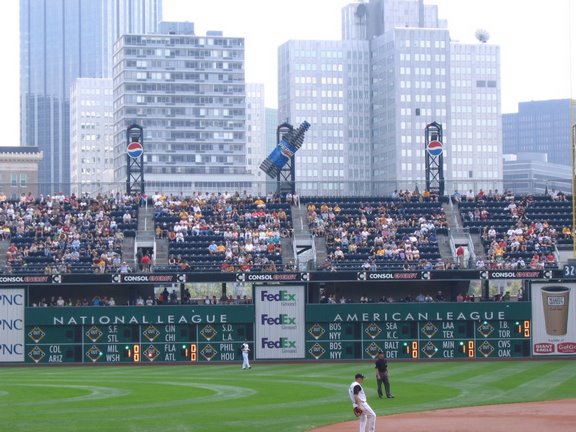 PNC Park is generally acknowledged to be a beautiful stadium for baseball. It sits next to Heinz Field, used by the Pitsburgh Steelers of the NFL, with a civic plaza between the two stadia. The two teams used to share Three Rivers Stadium, and the two new facilities were built on the footprint of that stadium and its extensive parking lots. The project served to revitalize and entire section of downtown Pittsburgh, and the two facilities are now surrounded by parks and walkways.

It hosted the 2006 All-Star Game of Major League Baseball.

In 2020, PNC Park almost became the temporary home of the Toronto Blue Jays, as rules regarding the crossing of the Canada-U.S. border during the coronavirus pandemic made it impossible to hold games at Rogers Centre. The arrangement was for the two teams to share use of the ballpark and facilities, with the Jays making minor adjustments to their schedule for dates when the facility was double-booked. However, less than 24 hours after this was announced, the state of Pennsylvania pulled the plug as this would have meant too much additional travel into the region by outsiders. 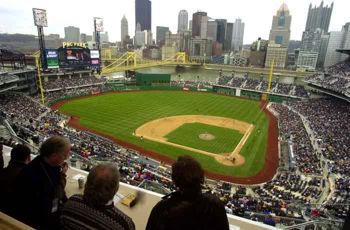