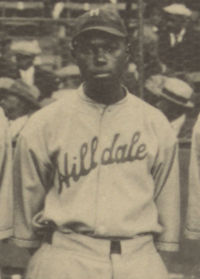 "No matter how much the pressure, no matter how important the play or the throw or the hit, Judy could do it when it counted." Cool Papa Bell, The Negro Leagues Book.

William Julius "Judy" Johnson was a third baseman in the Negro Leagues.

Johnson was born in Snow Hill, MD. Although his father wanted him to be a boxer, Johnson, who was 5' 11" and only weighed 150 lb., was far better suited for a career in baseball. After being a dock worker during World War I, Johnson began his baseball career in 1918, reaching the top-level Negro Leagues in 1921 with the Hilldale Club, a team for which he played through 1929.

In 1930 Johnson was a player-coach for the Homestead Grays, and in that capacity he discovered Josh Gibson. From 1935 through his last season in 1938, Johnson was the captain of the Pittsburgh Crawfords, one of the greatest franchises of all time. Although the Crawfords also included fellow Hall of Famers Gibson, Oscar Charleston and Cool Papa Bell, Johnson was the glue that held the team together. His vital role on the team was most apparent in the 1935 Negro World Series, when he hit a clutch single to win the sixth game with the Crawfords down 3 games to 2 against the New York Cubans. The Crawfords won the series in seven games.

Johnson was a precise contact hitter who batted reached an average of .416 in 1929, but his greatest ability was his fielding. Along with Ray Dandridge and Ghost Marcelle, Johnson was one of the greatest fielding third basemen in the Negro Leagues. He was also one of the smartest men in baseball, able to compensate for any physical shortcomings with his ability to think faster than his opponents, particularly in pressure situations.

Although Johnson retired nine years before the integration of the major leagues, he was eventually able to apply his baseball knowledge in the majors, becoming the first African American to coach in Major League Baseball (1954). He also was one of the most accomplished talent scouts in baseball, responsible for signing Bill Bruton and Dick Allen.

Johnson retired in 1973 and was elected to the Hall of Fame in 1975, the sixth Negro Leaguer so honored. Like Pop Lloyd before him, he was known for his exemplary character off the field. He died at age 89 in Wilmington, DE.

Johnson's home in Marshallton, DE is now listed in the National Register of Historic Places. The house is located at the intersection of Newport Road and Kiamensi Avenue.

Some or all content from this article is licensed under the GNU Free Documentation License. It uses material from the Wikipedia article "Judy Johnson".