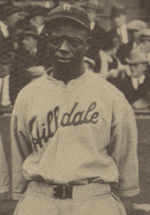 Phil "Fish" Cockrell started his career as a top-level Negro League pitcher in 1918, playing for both with the Lincoln Giants and Hilldale. He pitched for Hilldale from then until the team's demise in 1932. He pitched for the Bacharach Giants and Philadelphia Stars until 1934, his last season at the top levels of the Negro Leagues. He managed Hilldale in 1929 and the Bacharach Giants in 1935, and then became an umpire from 1936 until his retirement from the game n 1946.

The spitballer was a mainstay of the great Hilldale teams of 1923-1925, when they won three consecutive Eastern Colored League pennants. He was said to have a good fastball and sharp control as well as his mastery of the spitter.

He pitched two no-hitters in Negro League play, the first in 1921 against the Detroit Stars and again in 1922 against the Chicago American Giants. He started and lost the first game of the first Colored World Series, and had a 1-1 record in the 1925 Colored World Series, winning the final game. He umpired in the 1942 Colored World Series. He lived in Philadelphia after his retirement as a player, rooming with former teammate George "Dibo" Johnson. After Johnson died, Cockrell led a fundraiser to get money for a memorial tablet for his grave. He was murdered in 1951 while walking out of a bar in a case of mistaken identity.