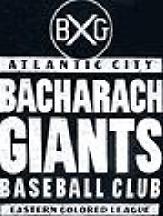 Starting in Jacksonville, FL as the Duval Giants, the team moved to Atlantic City, NJ in 1916 and became the Atlantic City Bacharach Giants. Dick Lundy played for the team in 1918 and in 1919 they became a competitive team (6-5 against other top black teams) as they had stars at short (Pop Lloyd), first base (Ben Taylor, in the outfield (Spot Poles) and on the mound (Dick Redding). Redding was player-manager of the 1920 club - Lloyd left but Lundy returned at short; Poles and Taylor were also gone but the team remained one of the better black teams in the east and added Oliver Marcelle at third base. In 1920-21, they played briefly in the Cuban Winter League with a mix of Negro League and Cuban players and went just 4-11 under Rube Foster before they withdrew from the league on January 13. Their 34-28 record against top black teams was the best in the east in '21. Redding went 15-11 and Lundy hit .361 as the roster remained relatively stable. The club slipped in 1922 as Lloyd again replaced Lundy at short and #2 pitcher Nip Winters was just 6-10.

The Bacharach Giants again dominated the ECL in 1927 with a 64-39 record. With declining attendance, they went into debt despite a fine year. Grier (1-2) fell flat and Henderson (15-6, 3.60 RA) was sidelined after August 7 with a sore arm. Jesse Hubbard (13-8) and Farrell (20-11, .301) took over - the converted outfielder Farrell led the league in wins. Lundy hit .303, Marcelle .326 and 2B Milton Lewis .354. They again lost the Series in a close match with the Giants, 5 games to 3 with one tie. Farrell became the second pitcher named Red from Atlantic City to pitch a Series no-hitter in two years.

The Bacharachs joined the new eastern Negro League, the American Negro League, in 1929 but went just 16-30. With Lundy in Baltimore, Taylor returned to manage and play first (he hit .306). Henkins (.317), White (.357) and Clint Thomas (.342) gave the team three good contact hitters in the outfield, while Henderson went 6-0 as their one good pitcher.

When the ANL folded as well, the Giants rapidly declined. In 1934 they again joined a formal league with the Negro National League/East-West League but went just 6-18 with Hubbard now managing. Farrell was just 2-5 while OF Ed Stone hit .427. The team had been bought by Philadelphia, PA businessman Harry Passon and had played several season as an independent team from 1931 to 1934. The Bacharach Giants did not return to the league the following season, but continued for several years as a semi-pro independent team, most notable for providing future Hall of Famer Roy Campanella his first opportunity to play professionally.