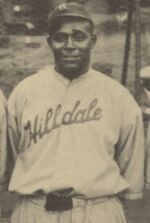 Beefy first baseman George "Tank" Carr was a long-time regular in the California Winter League. He led the CWL in batting average in 1916 and in homers in 1925. His .336 average ranks 9th all-time in the league. He also was 2nd with 52 career doubles, tied for first with 17 triples and fourth with 27 home runs. In the CWL, Carr hit .317 and slugged .545 against major-league pitchers; among the 11 white pitchers whom he got more than 4 at-bats against, he hit at least .250 against all except Red Oldham (.219). He hit .389 facing Charlie Root and slugged .625 against Ferdie Schupp, the top two white pitchers he faced in the CWL.

For several years Carr spent the summers on the west coast, where he grew up, but in 1920 he joined the Kansas City Monarchs of the Negro National League. Carr hit .336 and stole 15 bases; he was third in swipes and tied for fourth with 5 home runs. He led the Monarchs in average. The next season Carr was second on the Monarchs in average (.330) and his 15 homers were second in the NNL behind only Oscar Charleston. Carr hit .303 in '22 for Kansas City.

In 1923, Tank moved to the Philadelphia Hilldales and slumped badly, hitting only .195, though he tied for second in the Eastern Colored League with 7 stolen bases. In his second year in the ECL Carr hit .270, finished fourth in the league with 15 doubles and second with 9 steals. Carr had one of his best seasons at age 30 in 1925. He led the ECL in doubles (26), triples (13) and steals (27) and posted a .358 average to lead the Hilldale club. His 8 homers were 5th in the circuit. In the Negro World Series he hit .320 with a key home run in game 5 as the Hilldales beat his former Monarch squad. After a good '26 campaign, Carr went on a tear in the Cuban Winter League, hitting .416 (second in the league and better than the three Hall of Famers playing in the circuit). It was Tank's only year in Cuba.

After a fair 1927 campaign, Carr led the ECL with 14 homers and 19 doubles in '28 while batting .387, third in the league. He played briefly in '29 then vanished from the major Negro Leagues. His long CWL career (starying in '15) ended in '31. For his Negro League career Carr hit .310 in the Negro Leagues (20th among players with over 2,000 AB) and his 49 homers also rank in the top 25. Bill James writes that Carr's career was shortened by alcoholism, though he was still playing effectively in his early 30s.

While he spent only about a decade at the highest level of black baseball, Carr was an effective player who led the league in several stats during that time and who arguably was the top offensive player in the ECL in '25. A long-time star on the west coast, Carr is ranked as the 5th-best Negro League first baseman by James.

In his draft card for World War I, Carr lists his occupation as actor, whereas most Negro Leaguers list ballplayer.

He was married to a Sarah Carr and had 3 children, Henry M. Carr, Ernie Carr and a unnamed girl who passed away at a early age.[citation needed]